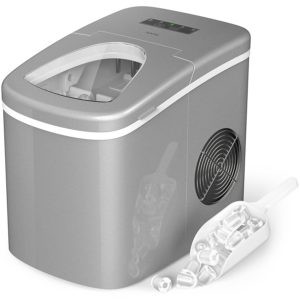 We live in an older house, with an older fridge that doesn’t have the ability to make ice. I miss having a fridge that can make ice, and having 2-4 ice cube trays that take hours and hours to make ice can be a total PITA. More so when you have 7 people in the house, and many of us love ice water, or iced coffee.

So when I finally had the funds via Amazon gift cards for doing various things online I decided to finally just break down and buy an ice machine. I picked the hOmeLabs Portable Ice Maker Machine you can find on Amazon!

I don’t have to run it every day, and in a little over an hour the bin I use for ice in the freezer is full and can last at least a couple of days. This is much better than what I had to put up with before. More so when the kids often wouldn’t switch around ice, and would just take it from the trays and leave them empty.

This machine makes ice cubes in about 6-8 minutes per small load, and makes 9 bullet shaped cubes at a time. I use the large setting, because I think the small setting is too thin and would just melt way too fast.

There are much fancier, and much more expensive ice machines out there. This one doesn’t keep the ice cold, and so you’ll have to put the ice in the freezer once the basket fills. But since I like having a decent supply of ice on hand, and have no desire to go buy ice all the time. It works perfect for us, and I can have ice in a few minutes if no one remembers to make more. Instead of having to wait hours.

Hey, what can I say, I really REALLY like having ice water on hand as I get thirsty fairly easily.

The hOmeLabs Portable Ice Maker is pretty quiet, I would say it’s somewhat louder than the Amazon reviews lead me to believe, but it’s not so loud that it’s obnoxious so it doesn’t bother me too much. Granted our downstairs (minus my bedroom, the bathroom, and the laundry room) is a rather open layout and my hearing borderlines on ridiculously sensitive, so many people might not even notice it.

If you’re in the market for a great ice maker at a price that doesn’t exactly break the bank, I would highly suggest this machine. Summer is coming and with it come parties, bbqs and other things were cool drinks and a steady supply of ice are needed. Plus hey, if you just like ice water like me and don’t have a water hook up near your fridge or a fridge that even supports it, why not?  It’s now my 2nd favorite kitchen gadget!

What’s your favorite cold drink? Have you ever considered just buying an ice maker before?