Like usual for me, I hit a bit of a slump of tiredness and just pure wipe out at the end of the year. This time, it’s lasted a little longer than I’d really like. Right after Christmas I woke up to excruciating pain, and found out I need yet another root canal. I can’t really afford it. So I took the route of just taking antibiotics and trying to keep the infection gone until I can. I also need a crown on a root canal I had done about 5 years ago, and will need a crown on the new one too.

What sucks it, things tend to be fine for my teeth until I start to floss. I always seem to somehow damage something or another when flossing? Maybe it’s because I have really tightly together teeth. So maybe I am not careful enough? Either way it sucks. Antibiotics made it so I was fine for about a week and a half. I mean from when I was done with that round. Now there is pain again. So I’m a bit frustrated with that and it’s been hard to focus. Ibuprofen tends to make my brain a bit foggy and mushy feeling.

It’s not just tooth pain issues causing a slump, it’s also the fact that our area has been hit with the most snow we’ve had since the winter of 2008/2009. That year really sucked. Like, insanely bad for the time we had snow.

This year super sucks. We’ve had snow for over a month now and it just decides to keep coming. 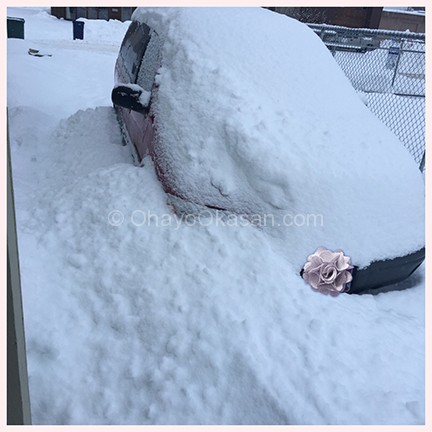 Yes, I know that’s a hazard with living up North. Someday I’ll afford for us to get the heck out of here.

It got bad enough that I went to uncover the car the other day, as I had some packages to ship out.. and I came out to the image above. Part of that is because the snow slid off the roof, the half that’s obviously higher than the other. But it’s still bad overall. *sigh* 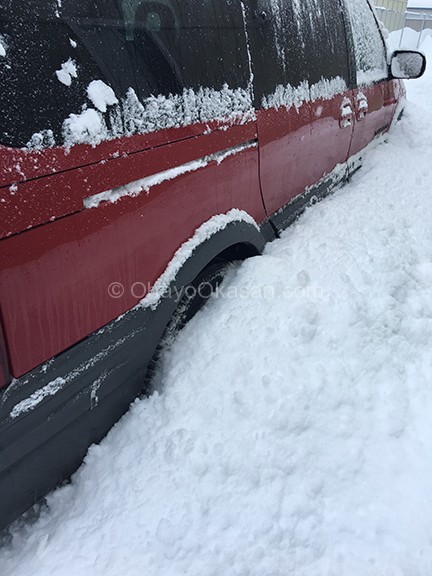 My work didn’t matter though. Between Var and I we shoveled a fair bit, and I cleared off the car. In the end, she ended up being stuck.

I tried again to get her out, but I wasn’t strong enough to get the snow out enough.. and.. my 11 year old wasn’t. Having Fibro and arthritis doesn’t make for fun when you’re shoveling mounds of this stuff.

So I had to walk the packages to the nearest postal place. Only to find that many of the businesses and things in the area haven’t shoveled their sidewalks at all. 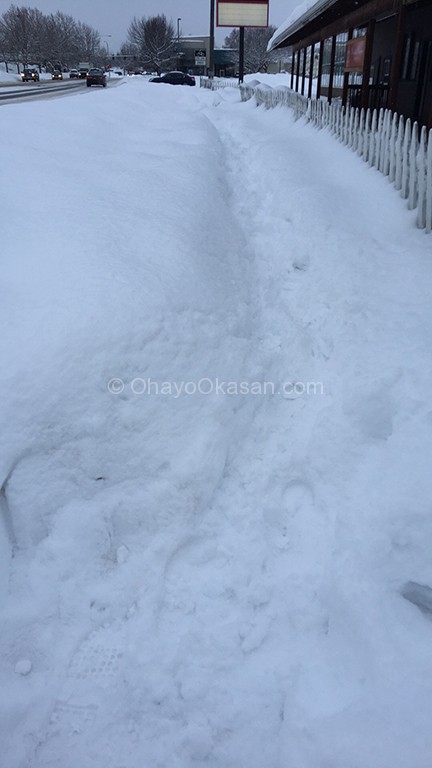 So my short, sore, tired, self walked through the crap just to get the packages out. I had overworked myself at this point, like seeing floating flashing spots and blurry vision of dooom. 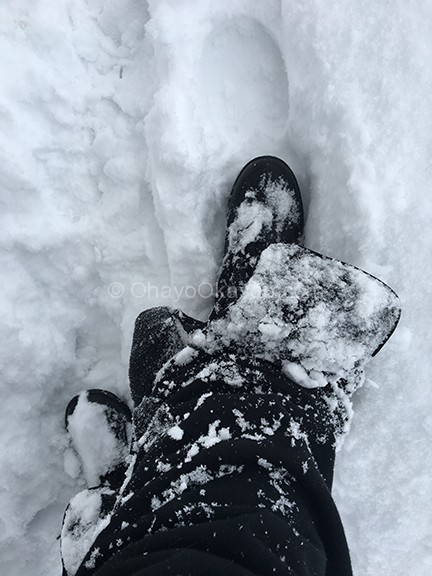 I ended up going through snow that was thigh deep at some points, but the picture above is after I came out of some that was knee deep. Thankfully, once Aussie got home he managed to get enough snow out from under me that I got unstuck. I managed in and out of the driveway a couple of times and figured I was all good….

Until the next morning when I went to take Lisi to school.

Yep! I was about 4 inches off my previous tracks and got.. STUCK AGAIN..

Even the neighbor across the street wasn’t able to help. This time Aussie wasn’t either.

It took my dad and brother-in-law to pull my van out of the snow just to get it to move at all. So more snow is packed where I got stuck. I managed to get bags of non-scoopable cat sand for traction… and… so far things are okay as long as I’m now trying to get into the driveway without being super careful.

Sadly.. I can’t get my mail. The snow blows came after we got me unstuck and ended up blocking off my mail box.. AGAIN.. after Aussie had done the required 20 feet of driving space.. AND they blocked the opening of the driveway so we had to shovel again!

I just… we need a snowblower at this point. But there are so many different ones I am not sure what to get. I keep telling myself I’ll get one.. but I’ve yet to bite the bullet. >.>

So.. pretty much right now I am doing what I can to survive the pain of Fibro and angry joints, on top of just general depression mixed with awful SAD. The snow makes SAD worse for me than rain does…

I could really really use some rain..