So Kat’s DS lite case broke recently at the most annoying part (this is a common defect on DS lites..) right where the hinge that keeps it standing and clicks goes. >.< *siigh* 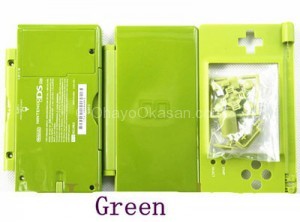 So, because I didn’t have an actual replacement part for that part of the screen area for the case (fixing this defect requires COMPLETELY taking apart the DS lite!) I told her I’d buy her an entirely new case. Which I did, it’s a green case the color of an Angry Birds pig. Only because that’s the only green I was able to find, didn’t matter she was happy with it.

I got everything apart alright, but had some difficulties getting the new case (it’s aftermarket of course, 3rd party after market) to do everything I wanted. It didn’t actually come with enough screws to put together, thankfully I had all the screws from the old DS.

Once I got everything back together I noticed a problem… The top screen was not showing any visual (uggh) and the touch (bottom) screen no longer had touch screen capabilities. WTH?!

So then started my adventure to take the entire thing apart again, all the while something around my desk area (not my computer, fan, lamp, printer, monitors… anything I could unplug) was making this horrific electronic SQUEAL for hours on end. I felt like I was going mad. Anyway, from there TWO of the screws completely stripped as I attempted to carefully take them out. Sh*t!

Thankfully I have this wonderful (ish..) little hand drill (that’s sadly not electronic) that I use in just such an emergency.. But by this time I’d only had breakfast, the squealing had been driving me batty for hours, and it was 4 hours into this repair! It should have taken about 2 hours start to finish, but noooooo. *sigh*

Sadly when I got everything apart the ribbon cable for the top screen ripped *sigh* I knew it had looked a little iffy, but it had been working before. Thankfully I have three replacement top screens (one has a couple of blown lines as far as visuals goes, but I use it for diagnostics at least, one is brand new) so that wasn’t a HUGE deal.

Even worse though was the fact that none of the touch screens I  have (three, two spares and the one that was already on her DS) actually recognized touch capabilities. I cleaned contacts and all those standard things but still nothing came of it. When I asked Kat if there had been any issues with her touch screen before today she told me that ‘sometimes, kinda, every now and again it didn’t work.’ When I asked what didn’t work, she simply said that it didn’t notice the stylus. Crud.

This now means that Kat’s DS lite motherboard is basically junk. Of course it could just be the itty bitty connector for the touch screen that needs replaced, but honestly.. I’d rather just get a different one than work with that tiny of a little nitsy thing right about now.

Thankfully her DS game port works just fine, because I need to replace Var’s due to an issue IT is having. That I can take off and put on another MB no problem. Still doesn’t mean it’s not a total PITA.

No wonder Nintendo charges $70 to fix one of these things!