Today I’d like to introduce you to imPRESS Manicures.

Disclaimer: I was sent the following products in order to facilitate my review. No further compensation was gained in writing this post.

Lots of people love fake nails! I know I do, but I know I can’t afford $50+ to go to a salon and have them done, and have to go in every couple of weeks for a fill. Plus, the one time I did do that, my nails were so badly damaged that it took about 5 months for them to fully recover. It was THAT bad. So, I’ve tried press-on nails in the past, but they never last me long at all. I’m talking 10-15 minutes MAYBE for some reason. I don’t know how other people do it! 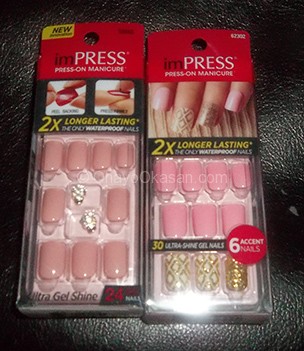 So when I heard about the imPRESS Manicure nails, that are waterproof and supposed to last longer? You know I wanted to jump on that!  I received two different types of nails, well two different colors anyway. One with little skull accent pieces, and one with accent nails. Of course I went with the accent nail kit first, as I liked it the most of the two. Not that the skulls are bad, but they just feel like something to try closer to Halloween. 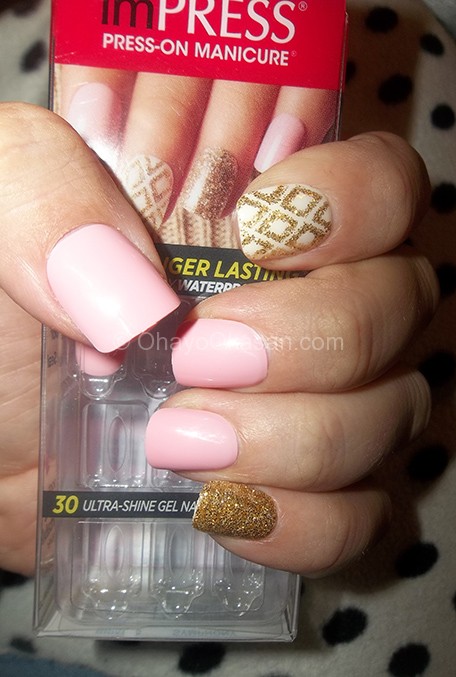 Now the imPRESS manicure packages say that these press on nails are waterproof, and longer lasting. So I was really hopeful they’d work out well for me. Though they also say that they’re very quick to put on.

I will agree that the general putting them on is quick, once you decide the sizes you need for each hand anyway. There are directions included on the back of the imPRESS manicures packaging, as well as a piece of paper inside. After you have your nails selected you need to wash and dry your hands with soapy water, wash your nails pretty good! Then, you use the included rubbing alcohol pad to prep your nails. The instructions say to ‘always put the thumb nails on first.’ Hmmm, alright then!

After you peel the backing and have all your nails in place, the instructions tell you to continue to press on them during the next 30 minutes! to keep them secure. Oi.. that’s not… quick… not when you have a toddler. On top of this, you can’t get your hands wet for a full hour. Which meant that I had to go bathroom, and couldn’t want my hands because it hadn’t been an hour yet. So that was kind of gross, but I can’t help it. I gotta go when I gotta go!

In the end these held on pretty well, for me anyway! I am pretty rough on my hands, and I got about 26 hours out of these before the nails on both of my pointer fingers fell off. 🙁 Bummer. The rest were on super good though! But I do a lot with my fingers, and the way I type and text uses both of my pointer fingers a fair bit, so generally I have trouble there anyway.

At $6.99 a package, these will probably be great for people who aren’t so rough on their hands. I even did some messing around under the hood of my car in them, so there is THAT anyway… As for me? I’ll be sticking with nails that need to be glued on unless I am looking for something meant just for a quick special occasion or a costume. But hey, you can’t be a perfect fit for everything. Eh?

They’re pretty, don’t get me wrong! They offer a pretty solution if you want something temporary without damaging your nail, as I did note absolutely NO damage when removing the rest of the nails. Which is a plus for me by itself.