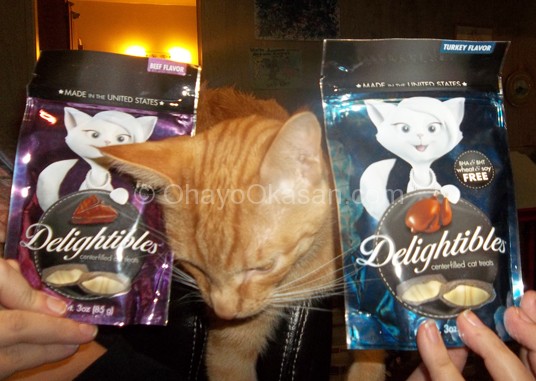 Cat treats!! How many cats do you know that like treats? I know 7! Though one of our kitties is extremely picky with it comes to treats, and that is Mister Shadow.

I was so happy to be sent some Delightibles cat treats for our cats to try. We were sent two flavors, Turkey and Beef! These cat treats are BHA, BHT, Wheat and Soy FREE! Yay for that!  Oh, they’re also made here in the USA!

Disclaimer: we were sent these treats to facilitate this review, no other compensation was gained in writing this post, and all opinions are my own on behalf of the cats. Good or bad.

Kimi is in the picture above, just hanging out over my shoulder on the chair as I held up the treats right after opening the box. Then, it was time to give them a shot!! 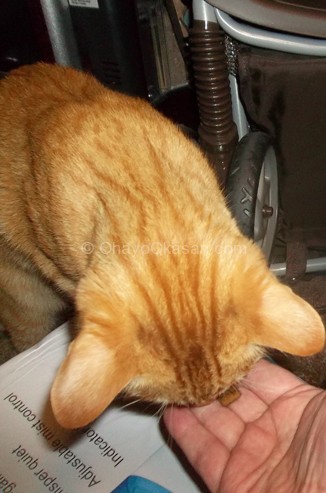 Skeeks decided that yes, yes he wanted treats, and then he wanted more treats. All the treats, yes! So we gave all the cats about 8, why not? They were super interested and treats are given out only rarely here. 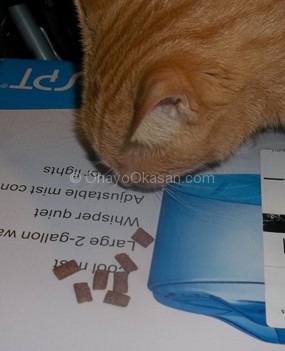 He preferred to eat them if I didn’t hold them in my hand, so I lay then down and he enjoyed them happily. Kimi will eat from my hand, and then crawl all over my in attempt to beg for more. 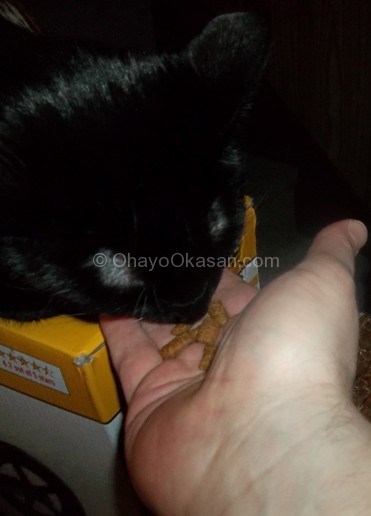 Tori curiously decided to snif at them first, before she went ahead and ate some more. Oh! We started with the Turkey by the way! Which went over very well and then we did the Beef flavor at a later date. 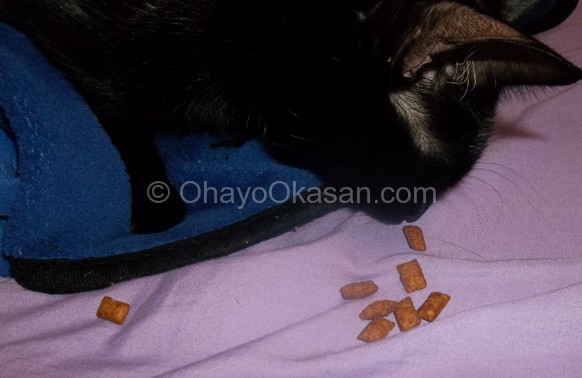 Miss Midnight approved of the treats as well, but she’ll only eat treats for Kat (unless Kat isn’t home, and then she’ll eat them for me) and no one can hold them. She needs to feel comfortable, and she’s kind of picky on who she will love at.

Shadow was feeling too shy, and didn’t want a picture taken. He also doesn’t like anyone to hold treats while he’s eating them. I think he feels like someone might take them? So for Shadow you have to lay down the treats and move away. He’ll eat food and let you take pictures, but not treats.

Though Shadow is picky, he did enjoy the treats as well! He seemed to love the Beef more than the turkey, but everyone else seemed to like both of them just fine. Puun would only eat if I pet him and made sure none of the other cats were around.. but Puuny can be like that. Silly boy.

Happily, the Delightibles treats are available at Walmart! So they’re easy to find and get more when the cats are out and I remember to replenish our stock.

What kind of cat treats do you feed your cats? The soft centered Delightibles are wonderful treats that now make TWO types of treats that Shadow will eat!