It’s been too long since I have done a Japanese post! I really have to stop getting behind on evvvvvvvvvvvvverrrrrything! D: Really! 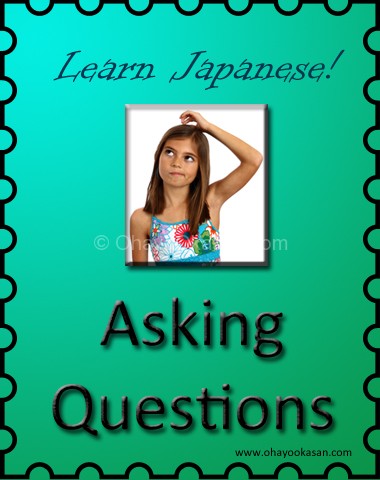 image of girl from stockvault

So today we’re going to learn how to ask questions in Japanese:

Wa: This one can be hard to explain, it basically means that the noun used before it is the topic of the sentence.
Watashi wa Amerikajin desu. Is saying “I” the speaker “American” “am” when you translate it pretty literal! But you’re saying “I am an American.”

No: You use this like the apostrophe in English to show possession. Wastashi no for example would be “My” or “mine.”

Watashi no enpitsu desu. Would come to be “My pencil is.” Or basically “That is my pencil.”

Now, in order to make something into a question, in Japanese you use ka at the end of your sentence.

Some other question words in Japanese are as follows:

Ikura: How much/How many. As in Kore wa ikura desu ka, meaning “How much is this?”

Nani: What. Can also be Nan. You can say Kore wa nan desu ka, and mean “What is that?”

I think for this time that is enough!