On August 3rd I spent the day (and then the night) with mom in the hospital. She was up and walking when dad got there (with Cid and I there as well taking slow laps), and she ended up making two laps around the nurses station! It was fantastic! She managed a couple of posts on Facebook via her netbook/mini that day, and had been only taking pain pills when needed. As they’d removed her push button dilaudid… sometime that I can’t exactly remember due to how tired I was.

She managed soft food that day as well, some carrots and pasta but didn’t manage much more than that. She hadn’t needed insulin at all, and managed another two laps around the nurses station before the end of the day.

Thankfully she made it through the night/early morning without any nightmares and throwing up! This was a first since being in the hospital.

August 4th I was still with her until the evening, she was very weak and tired in the morning (our night had been hellish, with her IV’s running out of fluids and the machine beeping and needing silenced every time it went off as we waited 45 minutes for anyone to actually come to the room after we called twice!) so moving wasn’t on the list of priorities in either of our minds but the Dr’s and Nurses really wanted it.

Due to general weakness and tiredness she couldn’t manage to eat anything or even take her pain medications. The pain meds ended up crushed and very slowly taken with some jello, which is considered a liquid somehow.

After 31 hours at the hospital I went home for long enough to eat a tiny bit (I wasn’t taking care of myself at all…) and take a bath before heading over to the ex’s in WA to pick up the kids. By the time I got back in ID I was exhausted so I excused myself for another hour before returning to the hospital for what was supposed to be another overnight. However at that point I hadn’t managed much more than 1hr 20 and 2.5hrs of sleep in a row in a few days, so I was wasted. I ended up texting in Dad about 5 hours after I returned to the hospital as my oldest really needed me at home as she’d been gone a week and was stressed out over her back issues (I’ll post about this in it’s own post later.)

Mom made two laps around the nurses station but despite her tiredness, thank goodness. 🙂

On August 5th they were able to take all the tubes out of mom! Her IV, draining bulb, and catheter were removed and her functions finally removed to normal! She managed about 8 laps around the nurses station before I got there, and was going to be released the next day. That night my youngest sister and I were with her and we had a ‘party’ to celebrate her last night in the hospital. We played scrabble and had in pizza! She managed another two laps around the hospital in the middle of our scrabble game (we needed a break!) totaling 10 for the day!

August 6th she actually got discharged, I went and stayed with her and dad while we waited for the discharge to happen and to get all of our personal belongings out of the room. I spent a bit of time with mom again on the 7th at home while dad was at work and it was nice to see her being able to be out and about. She ended up needing to make a very quick dr’s appt for her legs which were swelling and not going down. Thankfully I was sitting there in her office with her and knew exactly where the office was! So we took her in and she ended up with a diuretic.

That night when I got home cookie (our kitten) who has been having trouble coping with me not being home at night decided he really needed to curl up with me, and had to do it just a certain way. 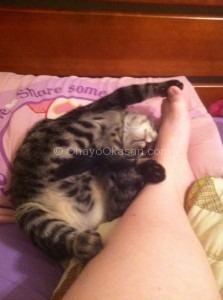 Of course I visited mom a bit more over the next few days and her recovery is going much better! On Aug 11th we (mom, little sister and I) went shopping at Target for back to school supplies. Mom didn’t need a walker or anything else to make it around!

From there, her recovery has been going so great! Sunday (the 18th) was my little brothers wedding at mom and dad’s house and she was doing so good. Aside from maybe pushing too hard sometimes, and still having some higher blood sugar problems her recovery is going great.

Hopefully from now on if she gets super sick for any amount of time she’ll go in and get herself checked out! She was ‘basically dead’ according to the doctors when she finally went to the emergency room and just a little while longer and she would have been dead on her couch in her living room!

Please, anyone who is ever feeling sick and just can’t shake it.. go to the ER. Even if you don’t have insurance, yes I know hospital bills are insane and they’re scary… but, death is worse than bills or bankruptcy!