Okay, I’m not REALLY singing. Okay, well yes I have been singing Rarity’s little song about making dresses for the ponies. Even though right now all I have been consumed with is attempting to make just Rainbow Dash’s gala dress.

Oh rather, translating this: 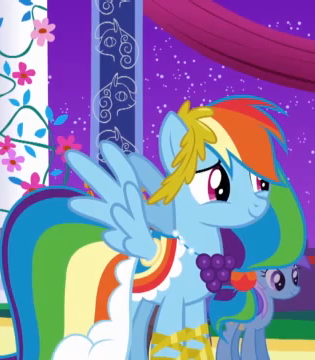 It’s not done yet, obviously. I also haven’t gotten the top finished.. and I’m not 100% sure how much more work I am going to put into the clouds. @_@

Yes, it’s made of fleece, because it’s freezing cold here already and I don’t want Kat feeling miserable and cold on Halloween. So I opted for fabric that will keep her warm.

I still have to do small clouds around the top. The yellow around the edges of the sleeves, and the blue for the regular Rainbow Dash dress with cutey mark!

Bleeeh… then I have a Rarity costume to make, and two tails! @_@

On top of that, a Princess dress for my cousin Emily.

Kat doesn’t have any bangs, so I’ve made her some that aren’t an exact copy of Rainbow Dash’s but are cute and have the right colors. I’ll be dying her hair the other colors of Rainbow Dash’s hair, and praying for the best! *faint* 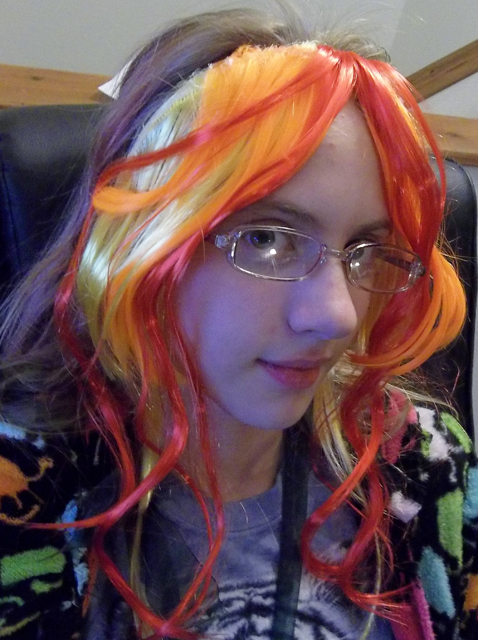 I also have a pair of wings to make, thank goodness Rarity doesn’t have wings! I’m having a hard enough time figuring out one pair and the Golden Laurels! @_@

I have the necklace for the costume finished… oh noooo but also gloves to go!

That is my business in a nutshell right now, costumes costumes and more costumes! @_@.

>.> Okay, it’s not finished in the picture, but it is finished here. Still you get the idea anyway. ^_^;; I am winging pretty much the entire costume as I go along. It’s going amazingly well considering I haven’t used any sort of pattern from a store and just what I’ve put together thanks to some newsprint and ‘winging it.’

Dinner is in the oven, and I’ve got more sewing I have to attend to. Hope everything is having fun with their Halloween plans!