So it’s been awhile since I’ve actually just talked about any of us. I’ve written about other stuff. Obviously mostly product reviews and things, but darn I haven’t really gotten around to much about us! I also need to start drawing again, because I have silly little comics and things in mind and I just need the energy to put pencil to paper.

This past winter wasn’t really kind to us at all. The weather was foul, my mood hasn’t been great, and… I really need to go to a doctor to look into an antidepressant again in hopes I can maybe.. finally.. find one that works enough.

Risiel was pretty much sick the majority of February, March, and half of April. I had a flu on my birthday, got bronchitis and spent most of April sick, then Lisi got bronchitis, and Risi got sick again. Whew..
Anyway, I wanted to show some pictures from stuff these past few months that I haven’t really shared in product reviews/in general!

We’ll go ahead and start with Halloween pictures! 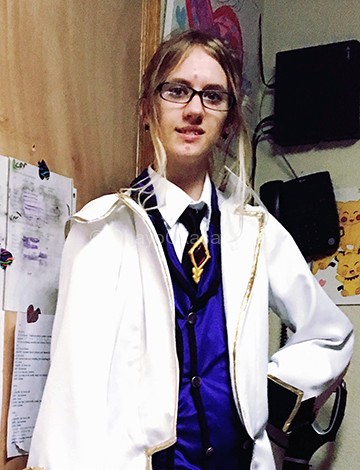 My mom blessedly helped with Kat’s costume, as I had four other costumes to take care of. My mom took care of the jacket and pants for Kat’s costume. She (Kat) was Ad from the game Elsword.

Kat made the vest (with some assistance), I made the gems, including the goldish part around the one on the tie (you can’t really see the ones on her sleeves.. *sigh*), and bought the shirt and tie. 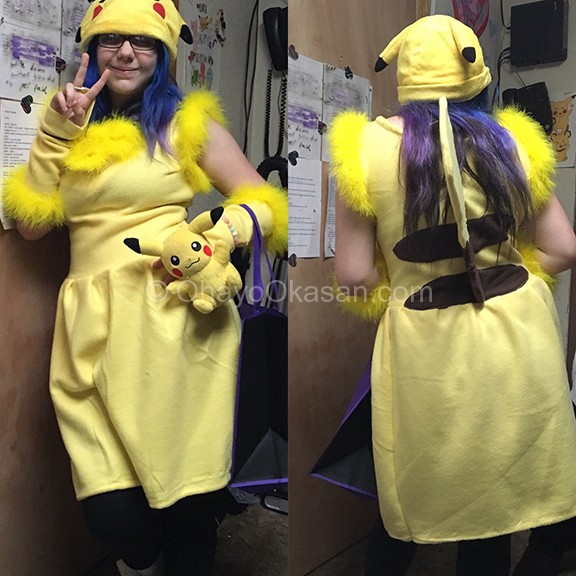 Sisi decided to be Pikachu again. Of course it’s been so many years of growing up between her first Pikachu dress and now, that I had to make her a new dress. This Pikachu dress is a bit more involved than the first Pikachu dress I made. In that I actually make a tank top style top (instead of just having it tie with ribbon like I did the first one way back when!), and she decided for fluffies/fuzzies.  She has the same Pikachu hat she had way back then though, and a more recent Pikachu plush too. Even the tail is a remade version.

Fleece is so blessedly easy to work with, and when it’s as cold on Halloween as it is around here I’m more likely to use it. It doesn’t hurt that it tends to be on sale that time of year too. Bonus! XD 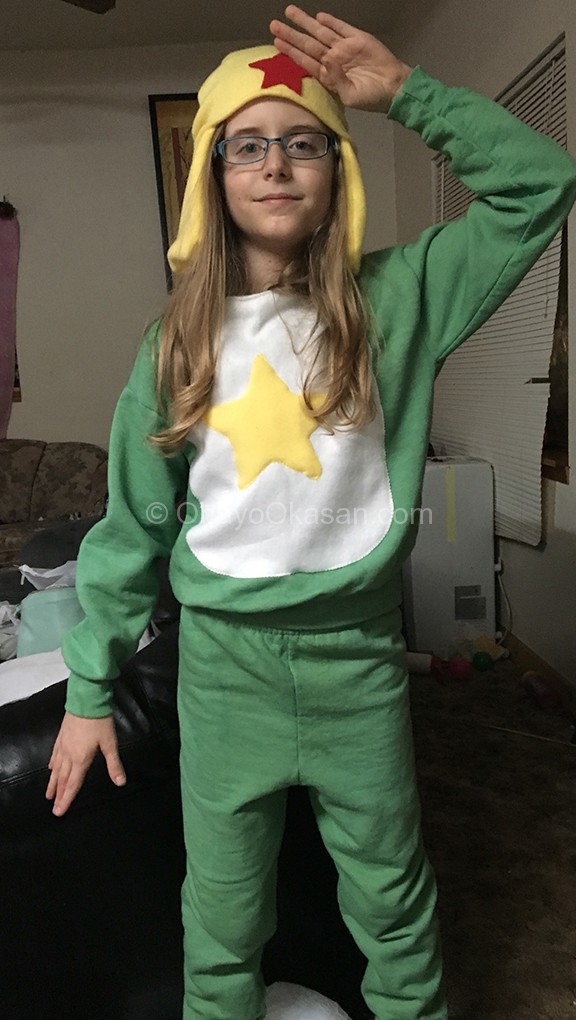 I made Var a Sgt. Frog costume relatively easily. I dyed a white sweat shirt and sweat pants, sewed on a white fleece belly, yellow star, and made him a hat.

I’ve actually only ever dyed fabric once before this… well aside from some tie dying when I was younger, but that’s a different method than this. I was happy it actually turned out well!

Var liked his costume so much he wanted to wear it pretty much every day. I couldn’t really let him do that at school, and now he’s getting too tall for the pants. So I need to get them away from him.

Risi was super in love with Var wearing this costume, as at the time the two of them (V and R) we REALLY into watching Sgt. Frog!

Lisi dressed up as Undyne (sp?) from the game Undertale. All I had to do for this was make her spear (a thin expandable curtain rod with a foam tip), make her head piece… which Mister Shadow CHEWED UP FIRST ONE OF ahhhh!!, make make her eye patch and do her makeup. The makeup and fins/head piece were probably the most time consuming parts. The rest is clothing that we already had.

Her fins are the wrong color because Shadow chewed up the first ones, I couldn’t find replacement foam in the right color anyplace in town either. >.>

Her glasses hide the eye makeup she has on, but she enjoyed getting to dress up as the character. ♥ I should have looked into gloves so her hands could have been the right color. She opted out of painted hands though. 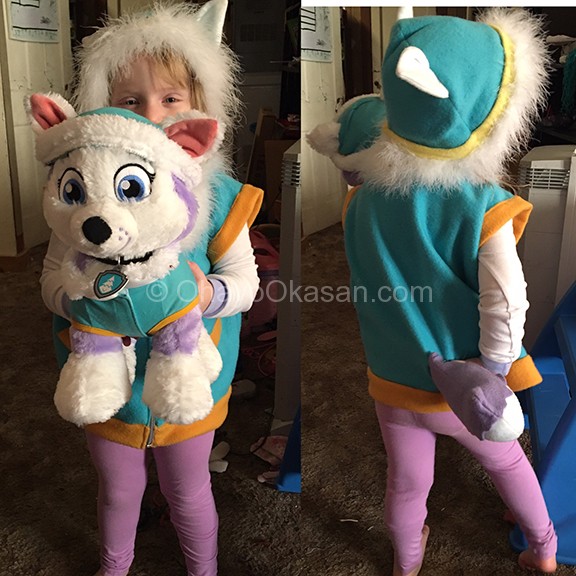 If you follow me on Instagram  – you no doubt saw these Halloween pictures back in October! Oh well..

Risi was Everest from Paw Patrol! I’ve only ever actually done a zipper once before this vest, so I was a bit… worried. It turned out that I made the first vest smaller than it needed to be, so I had to take the zipper out and make the vest you see above.

The Everest plush is actually from Build-A-Bear and she got it for her 3rd birthday, which is actually a few days after Halloween. She loved… okay still loves this costume, and wants to wear it regularly. Not as often as she did back around Halloween (she spent most of November and part of December wanting to wear it basically daily)

I kept finding pictures were Everest had either orange or yellow around the top of her hat, but mostly I saw what looked yellow. So… I went with that.  Her plush has orange on the vest and the hat, so.. I kind of regret my choice there. 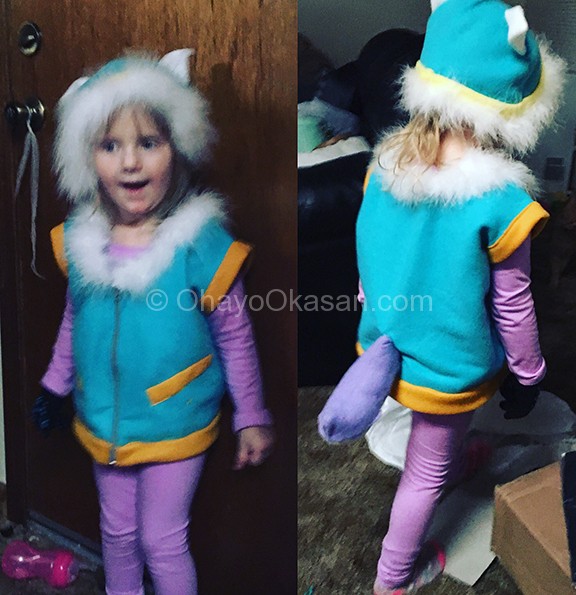 Risiel on the other hand couldn’t care less, and since she loves it I think it’s good enough for me. I really wanted to find an Everest costume in store, but the girl pups all had dresses as the costumes, while the boy ones had pants and long sleeved shirts and were more weather appropriate. Wth? Why couldn’t we have a similar version for the girls??

In the end I like what I made better, though I should mention that I bought the leggings, shirt, and some white gloves that she wore for this costume. 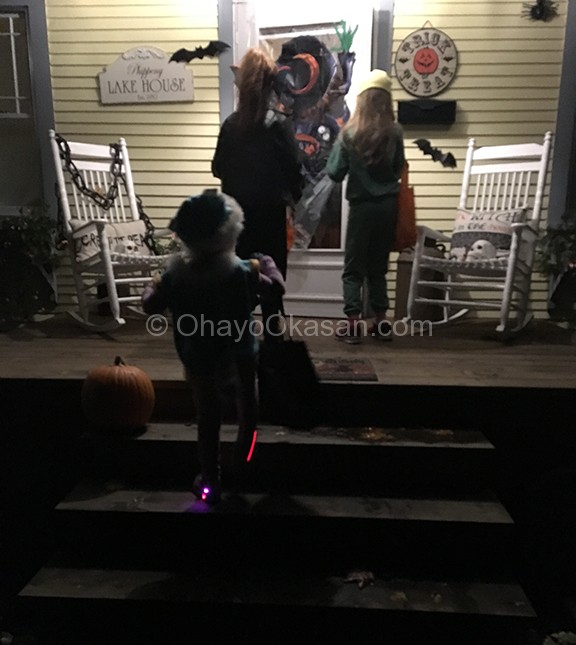 Of course she wore her light up Skye and Everest Paw Patrol shoes for Halloween. Because why not? I think Risiel enjoyed Halloween more than the rest of us. If just because she got to go ask for candy and be cute and Everest at the same time! 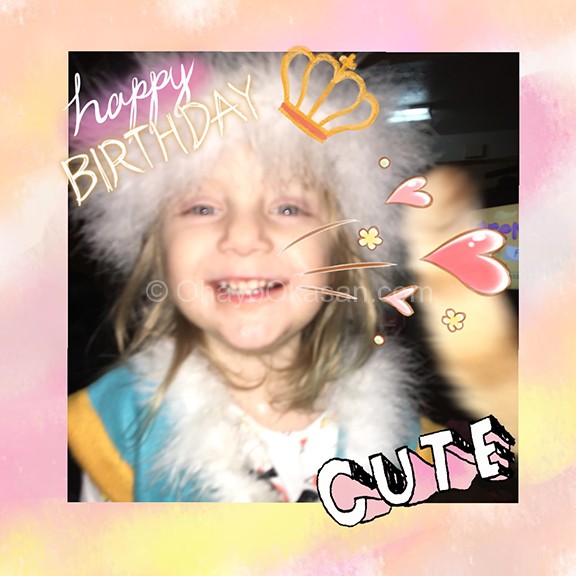 Risiel’s birthday is actually November 5th.. I’d meant to write a post around then but… never did. 🙁 I’m sorry kiddo! 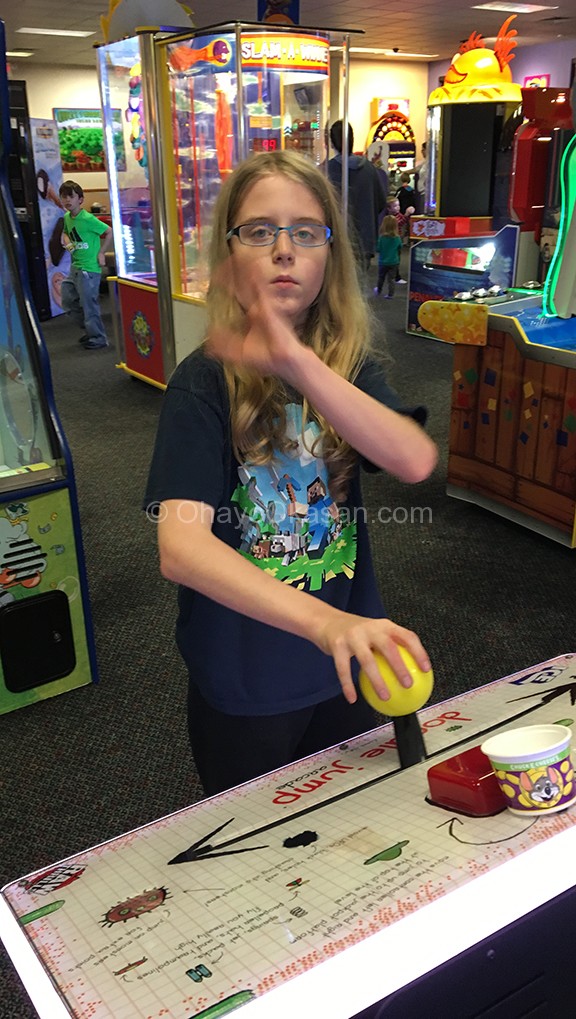 For Risiel’s birthday we went to Build-A-Bear (actually, T – Lisi’s dad, took Risi to BaB to get her Everest) and then to Chuck E Cheese to celebrate. I didn’t pay for a party package, just food and a ton of tokens. The party packages tend to stress me out more than just having to do stuff on my own. I feel like a bother even if I’m paying for that sort of thing.

The kids played a lot of games, and I think I was more worn out than they were by the time it was all done. 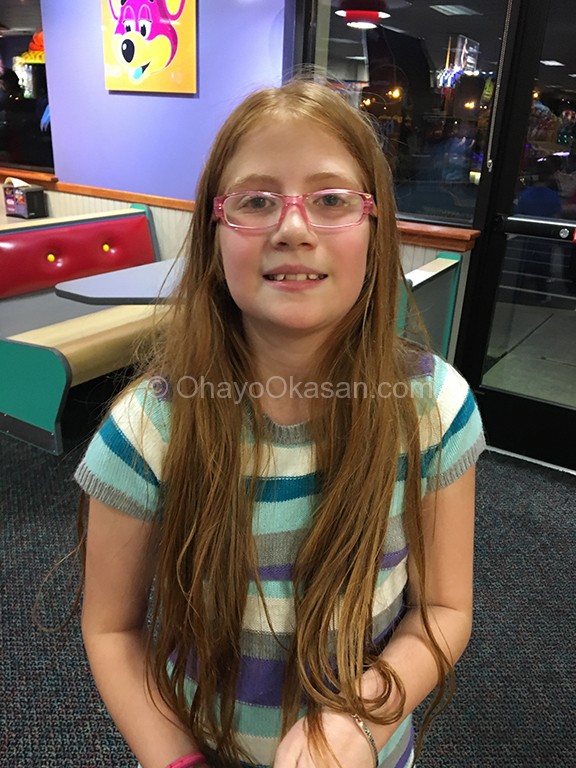 Heh, Lisi does not always enjoy smiling for the camera. 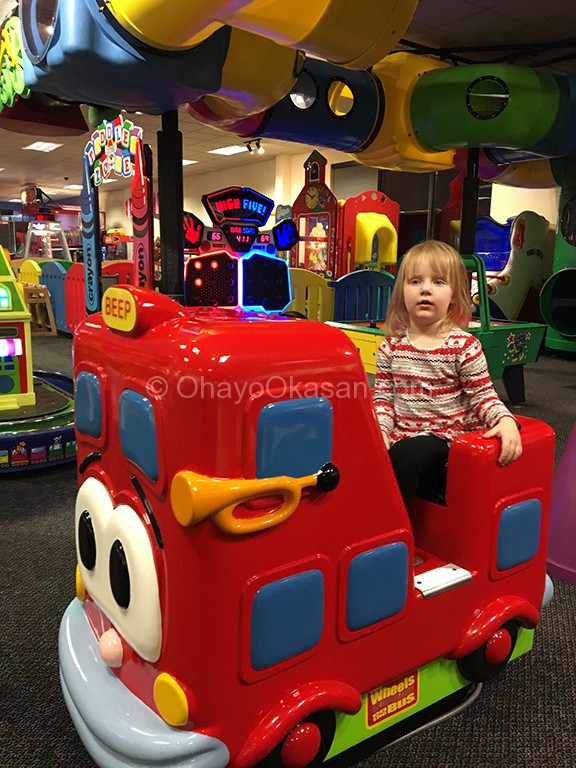 I couldn’t tell if Risiel enjoyed this or not, but she did ride it a couple of times?

Sadly the night ended on a bad note. We had cupcake in the car since I’d just gotten the kids from their dads (don’t worry she had food and water) but she got out when we were getting in, ran off… and we had absolutely no luck finding her though we looked for a month and a half before hoping that she just ended up adopted. We put up signs, posted on craigslist, various facebook groups, and I visited the shelters in the area and the pound many many times during that time. We even put up a humane trap with her favorite food in it… until someone stole it. 🙁

Things got busy in between all that. I was busy working on the Holiday Gift Guide here on the blog, my other side business, Christmas for the kids, Christmas programs for Choir, Strings and Band.. and all the stuff that comes with winter around here. Hint: too much snow and ice for my liking.

Aussie’s work (well Lisi’s dad works at the same place.. so does my brother… and my sister… and my aunt… and a few other people I don’t like. >.> ) had free pictures with Santa one day, so I dragged all the kids out and got pictures done! 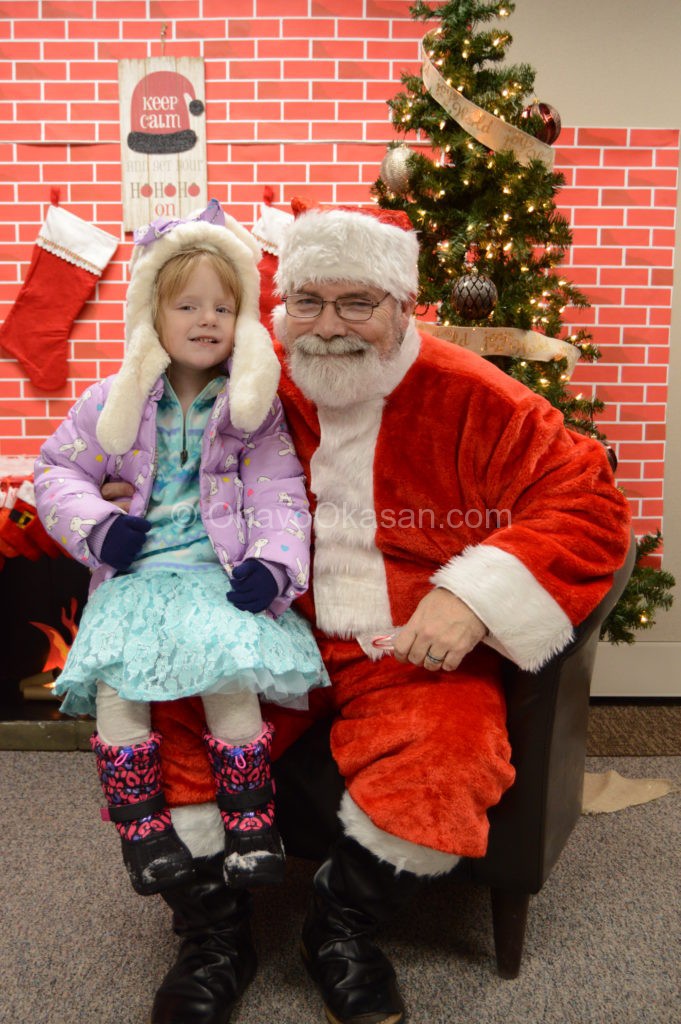 Risiel was the most happy to see Santa. When I’d try to have her even say Hi to a Santa at Walmart back when she was 2, it resulted in her melting down into tears. Who knew Santa was scary?

This Santa, didn’t seem the happiest to be there, but we did get there towards the very end so he was probably tired. 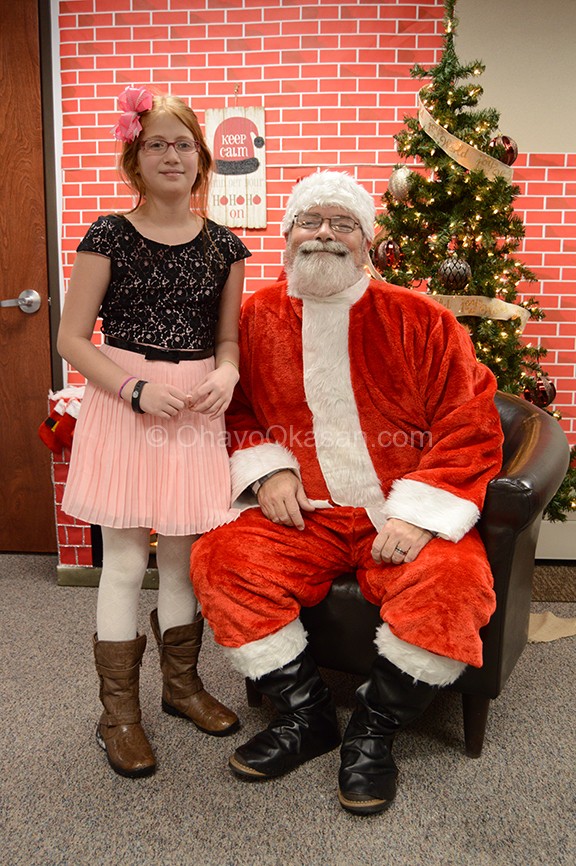 None of the other kids wanted to sit on Santa’s lap, then again they’re all big and tall. So it’s all good. XD 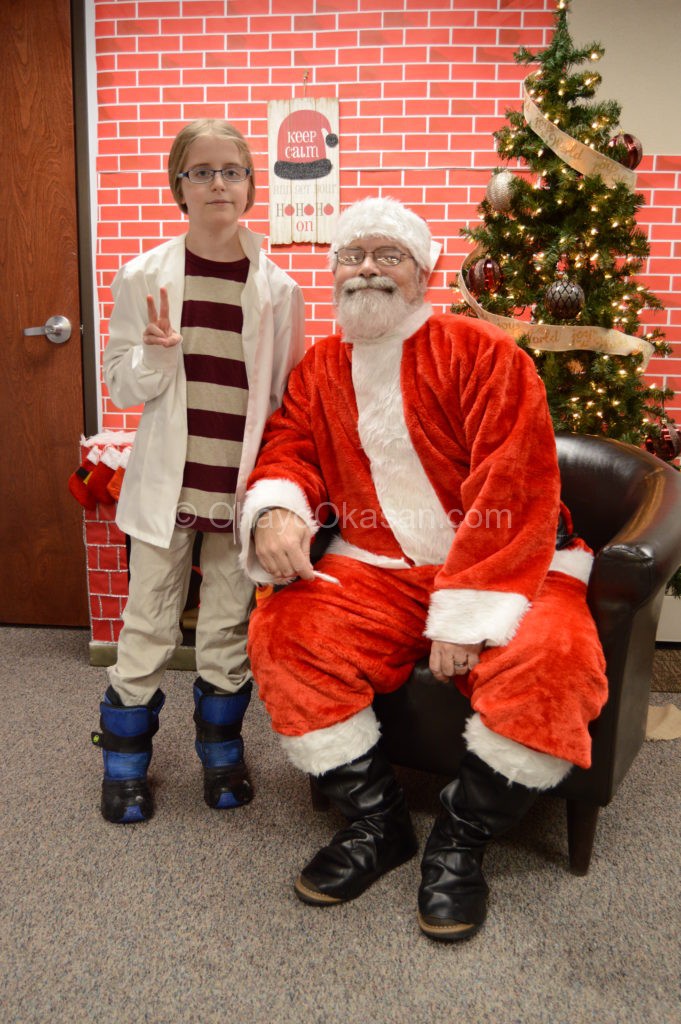 Var and Santa have a similar expression here don’t you think? XD 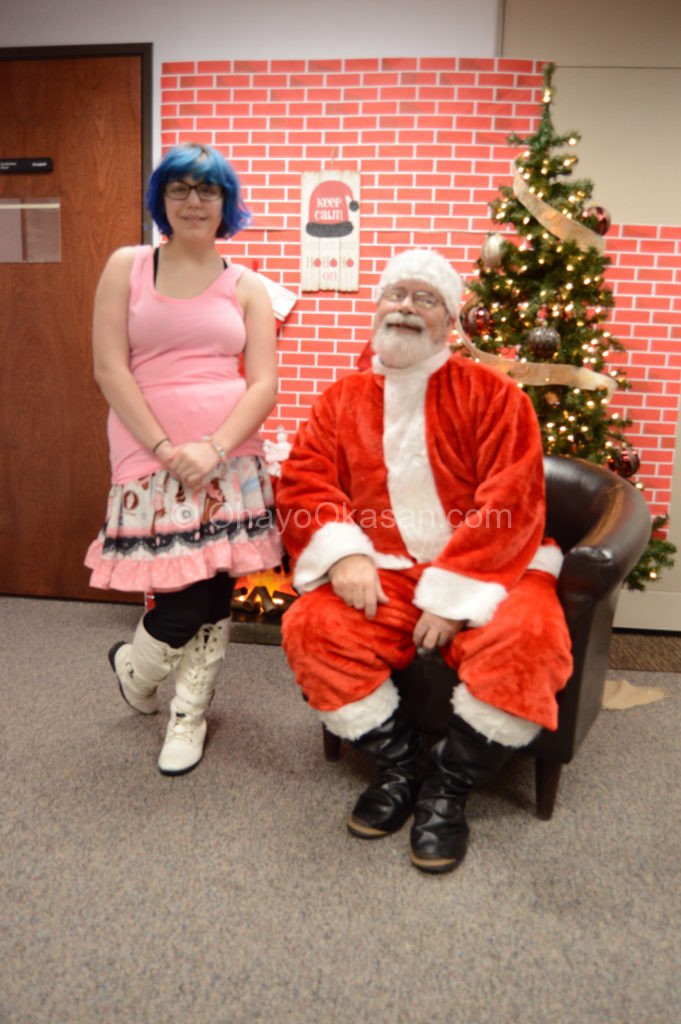 Sisi dressed up super adorable. I love that skirt. XD Santa looks a little happier here! Yaay!
It’s been many many MANY years since we’ve done Santa pictures. 🙁 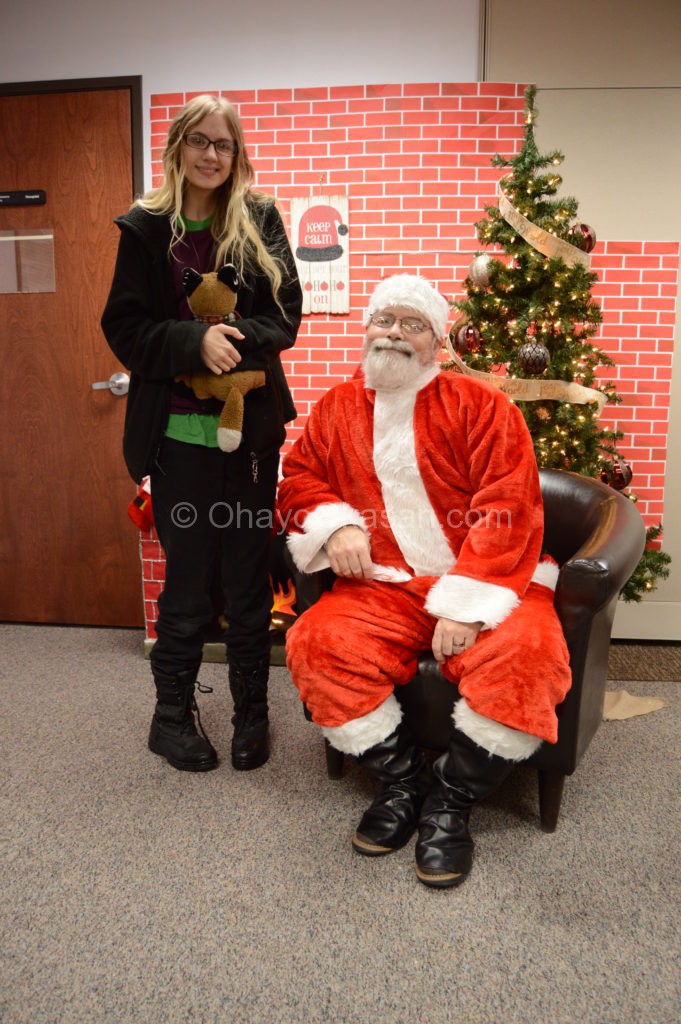 Kat wasn’t too sure about pictures with Santa, but I did get a smile out of her. So I’m happy. XD Hey, what more can you ask for when dealing with a 16 year old? At least I got her on film and with a smile! 😉 Teenagers, I swear!

I’m sure I’m missing a lot of stuff that I could talk about, but this post is already pretty darn log and picture heavy.

I hope that I can make posts about us a little more often the rest of this year! Wish me luck… can you believe we’re now to the half point of 2017?!