I went to the Seattle area with my mom, dad and little sister. Dad did all the driving, which was good and bad at the same time. Good because it meant no stress of trying to navigate and drive all that myself, and bad because I’m not used to his driving and am actually used to doing all the driving! XD

We left around 2:00AM Sunday morning, and got to the Seattle area around 7:45ish AM Sunday morning. I wasn’t able to sleep the entire drive. So I was extremely tired. @_@;;  We had breakfast, wandered around a bit, realized that since it was Easter (we planned badly..) a lot of places were closed. Then we finally wandered around Ikea once they were open. I was exhausted and passed out on one of the beds for about 10 minutes.

A 10 minute nap after being up for more than 24 hours is not a good idea.

Getting out of Ikea was an absolute nightmare, I felt like with all the turns I was going in complete circles, and actually I think somehow we were. But eventually I started crying quietly. I just wanted to buy some candy bars, but the checkouts seemed like they needed chased down.

Never go to Ikea when very very tired. More so if you’ve never been in one. It’s a nightmare. Lots of cool stuff though, but a nightmare when you’re exhausted as hell. 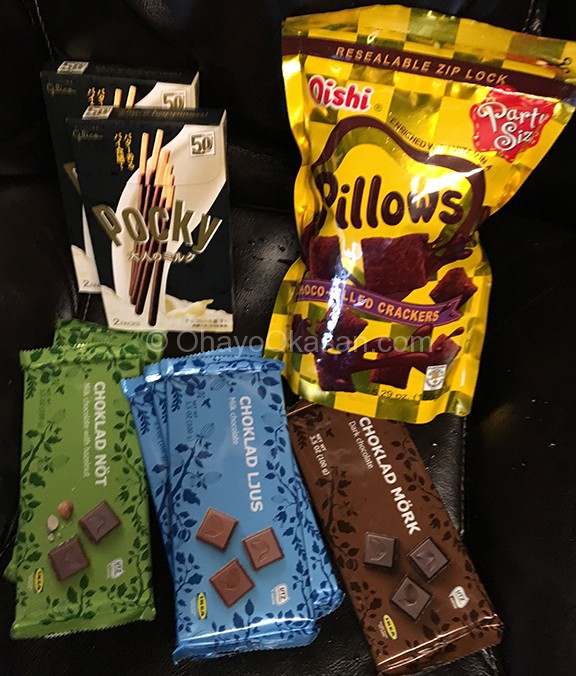 You can see the chocolate bars I bought, and some Pocky and Pillows (chocolate filled crackers from the Phillipines!) in the picture above. I only got the chocolate bars for the kids, I was too tired to remember that maybe I’d like to try one. I would have loved to try the hazelnut. Thankfully Risi was sweet and let me have a couple bars of her milk chocolate bar. Very… forcefully. XD I got Kat a hazelnut and milk, Dark chocolate for Bear, Milk for Risi, Milk for Lisi and Hazelnut for Var.

I spoiled Kat a little more in the chocolate department because she’s struggling a little on her start with meds. 🙁

From there we went to downtown Seattle and hit Uwajimaya. Mom and I ate at “Noodle Zen” I think was the food place we got food from. It was expensive, but yummy. There were a lot of Sakura-con attendees in costume, and I had forgotten for a moment that there was a con going on! Oops. 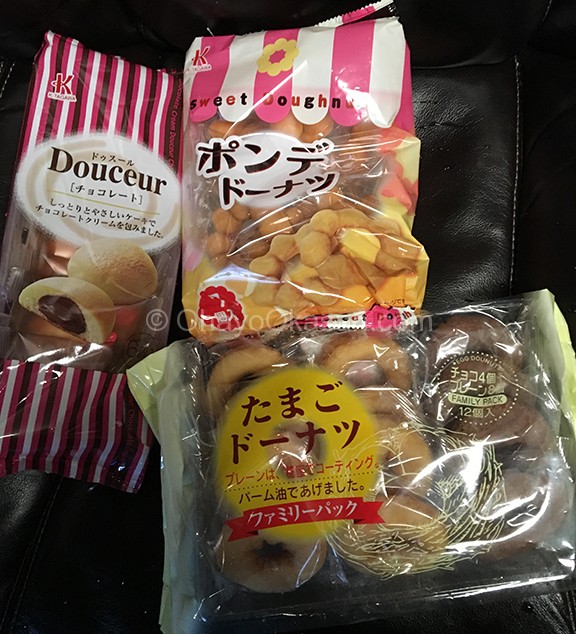 I was too tired to really look around much, plus I knew everyone else was tired and I didn’t want to bore them with my love of Uwajimaya.

If I was alone I’d spend a couple of hours letting myself explore everything and decide what I wanted. But I was stressed from sleep dep and worrying about others. I got some cute Japanese donuts and Japanese pastry on my first trip. I ate one of the pastries before getting pictures. it was a chocolate filled coronet. Very good!

We left and went to the Daiso Japan across the street from Uwajimaya. It was so small though. But mom and my sister seemed to like it for the most part. I did get two things there, some frosting bags and plastic tips to do Decoden cream with. :3 I’m excited!

We went to another Daiso, that was thankfully bigger, and newer and I got a lot more things. :3 I saw so many cute bento boxes there, but I didn’t remember to get more than one. 🙁 I was too tired.

Below you can see some craft supplies they have. I got some of the soft clay, as some people use it for the decoden cream and I wanted to give it a try. :3 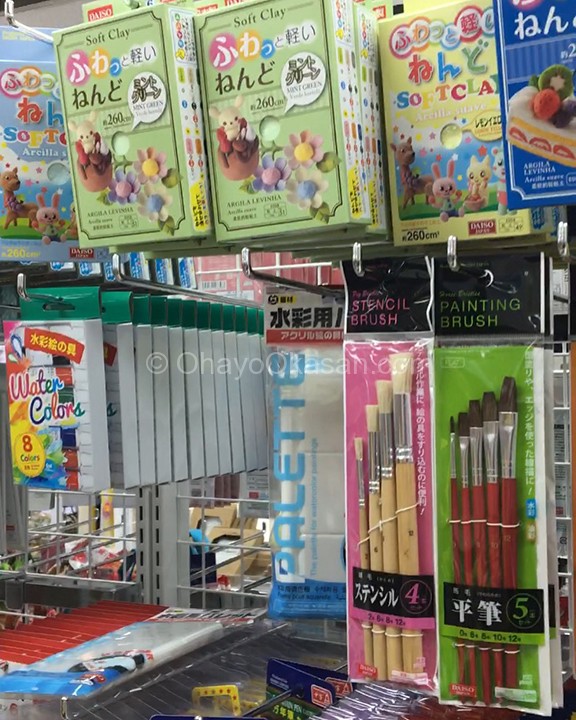 Here are some of the awesome bento boxes we saw at Daiso! 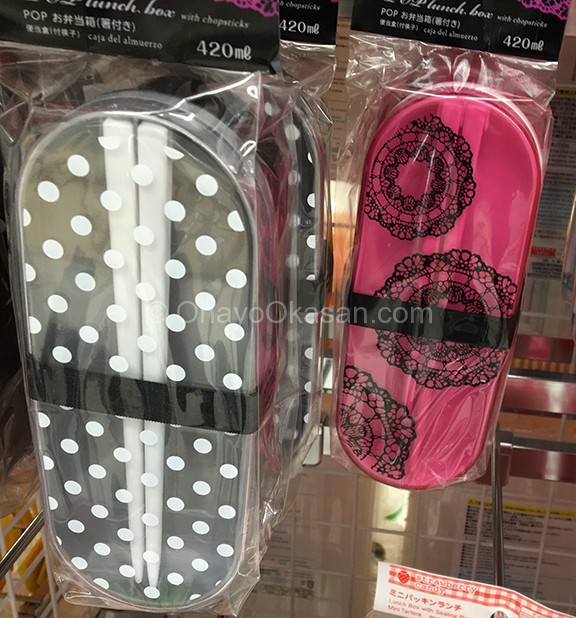 The pink one that looks lacy is my favorite, I did buy one of these for myself.  I wanted to buy more, but I can’t even remember why I didn’t other than tiredness and feeling like I needed to hurry. 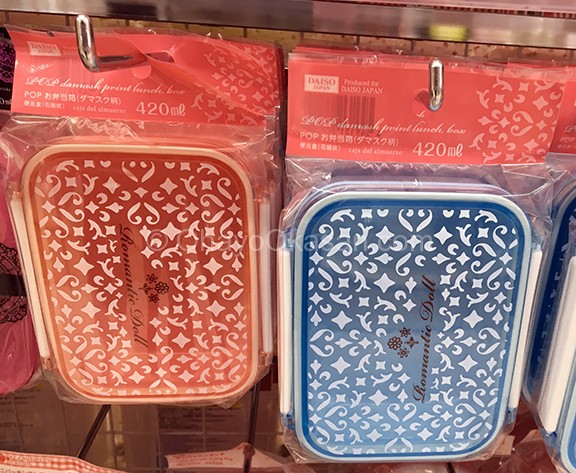 These smaller ones above are great for lunches for smaller kids and snacks for bigger ones or adults too. They hold rice and a tonkatsu too. 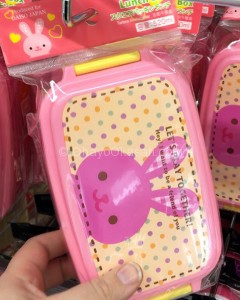 I love the cute bunny they have on the bento supplies there! My sister did buy her youngest son a lot of bento things with trucks and things on it. I’m sure he loves it!

Thankfully by then it was late enough we could head towards the hotel! We got there after the check in time of 3:00pm and I passed out pretty quickly!~!

When we woke up that evening we went to a grocery store and got some food stuff to eat. Sat around the hotel, and then passed out for more sleep! The next day we went to various malls and checked out a couple more stores. One was a Seafood market (but had a lot of groceries) and the Uwajimaya in Renton we went too too. They didn’t have as much as the downtown Uwajimaya. But that… happens I guess.

We went up to the mall that had my favorite Daiso, only find that it had moved to the opposite side of the mall and is now about 1/3ish the size it used to be! 🙁 I was really bummed because I felt bad for dragging people up there for it not to be as much as I was hoping. I spent a lot of the trip feeling very apologetic and like I was wasting everyone else’s time. >.> 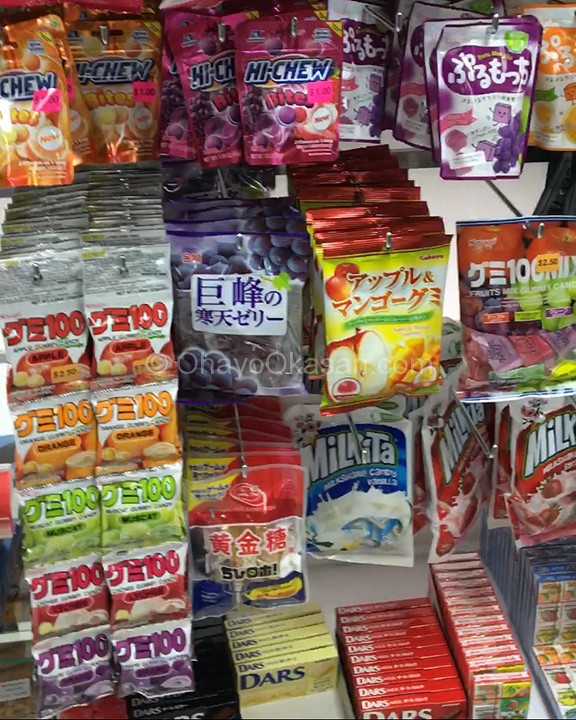 In the picture above you can see some of the snacks available at Daiso! I did buy some of the DARS chocolate. The dark and the milk, but not the white since I don’t super love it. I got some green tea things, and some special flavors of Pretz that I’ll be giving the kids on Sunday. Since we’re celebrating Easter a week late. :3 The kids (four of my five) were actually with their dad on actual Easter so it worked out well enough. So they get two, one being a week late. Ahh well. 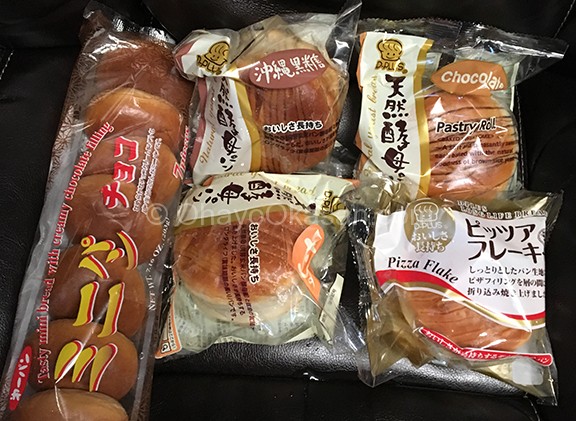 The chocolate bread up there was actually bought at Uwajimaya. But the Japanese bread in the little packages were bought at Daiso because they cost less there than anyplace else I saw over in Seattle, and a bit less than I can get them close to home!

Our last day there was yesterday, and we left the hotel after packing up everything and drove to what used to be a “better” mall? It’s called “The Outlet Collection” now and it used to be “Super mall of the great northwest” or something like that? My sister remembers it being better 3 years ago, but its said to have changed it’s name about 4 years. So I dunno.

She also remembered it being two story, but it was only one when we went. We think maybe we went to a different place and not what she remembers. But sadly as proven by the Daiso’s a lot can change in a short time. My favorite Daiso move and shrank drastically in 2 years. I can’t wait to go to California again. :3 They have awesome Daiso’s and I only went to two and was fully satisfied! 😉

The Outlet Collection still had some great stuff though, I loved the vending machines that I saw. They had… 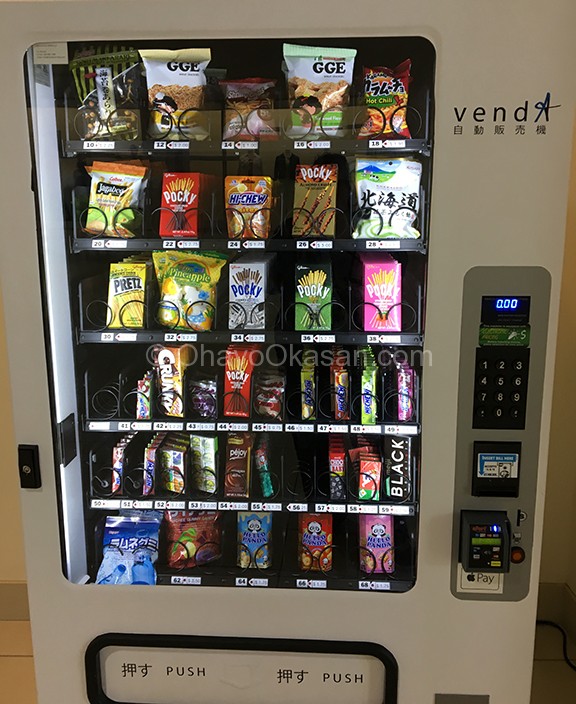 A Japanese snacks vending machine! The prices for the snacks weren’t as good as they are at Daiso. Thankfully I’d gotten all the snacks I wanted of this type between Daiso’s and Uwajimaya stores, so I didn’t need to get anything from the machine. Still cool to see a vending machine like this. We don’t have them here and I thought it was neat. :3 See those GGE crackers? The one that’s second from the right are really good and I bought myself a bag at Daiso the day before. Yummmy… :3

I wandered around a bit more and bought a few things at Hot Topic. A Vegeta mug that he glows when you put in hot liquid, he’s Super Saiyan. Then a tank top that says “It’s Over 9000!” and has Vegeta’s face on it. XD I think it’s a guys tank as it doesn’t fit me up top as well as I’d like but I got it in the biggest size I could find it. Still love it. I’ll just get a blue bra that matches so I don’t worry as much about showing bra bits. >.> 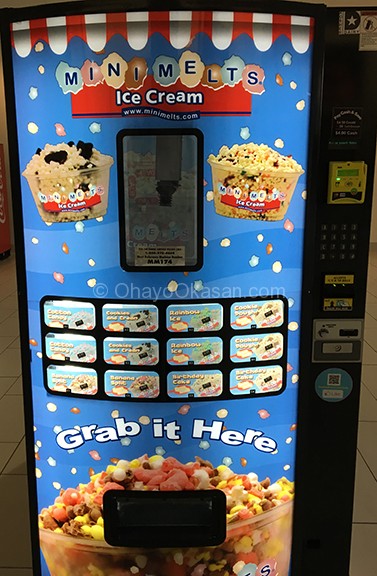 This vending machine is like Dippin Dots ice cream, but called Mini-melts! $4 for a little cup like this, but it was yummy. I forgot these stick to my mouth and tongue very painfully at first. @_@;; very much.. but the flavor was nice. I wouldn’t normally spend that much but I was alone since dad was looking around solo, and my mom and sister were looking at other things. Clothes type shopping… which I don’t really enjoy much. So I sort of splurged a little on myself. It was worth it to just get to sit and relax with them. 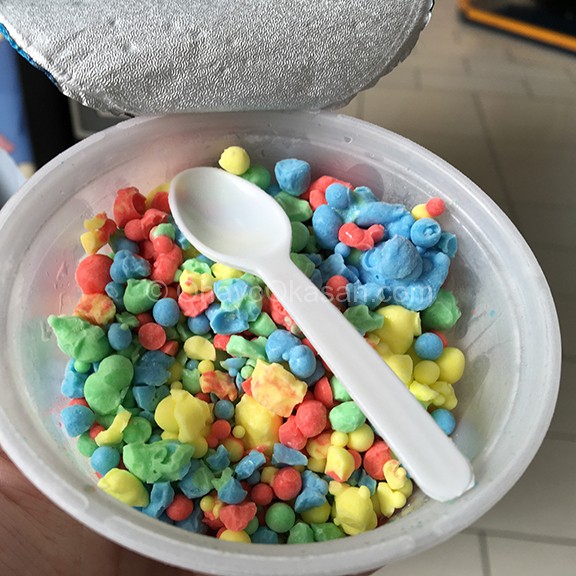 See yes, yummy rainbow flavor! It did come with the cute little spoon too. XD I felt silly eating with the tiny spoon. 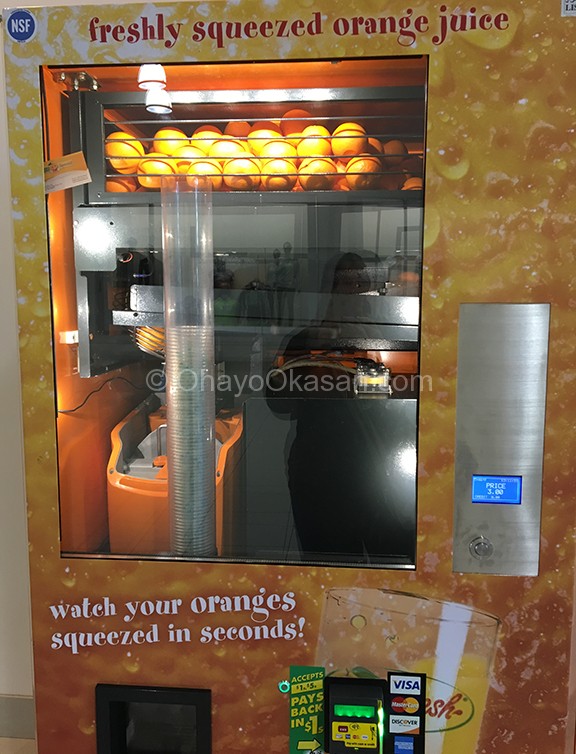 This vending machine lets you watch as it fresh squeezes orange juice for you! Sadly I didn’t see any options, allowing for no pulp… but I don’t like pulp so I did not get any of it. Ah well. 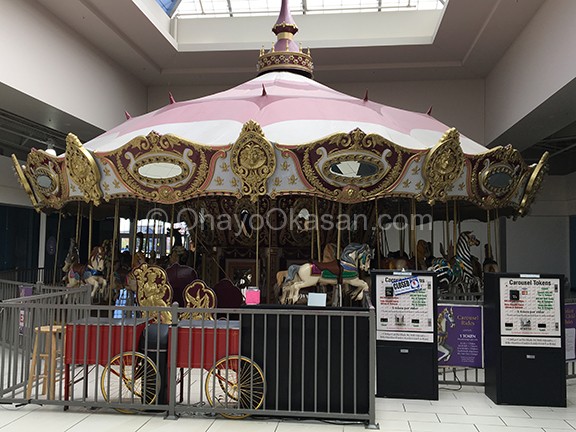 The shopping center/mall also had a carousel inside. Sadly it wasn’t open, and we didn’t make it over to it once it was open. I still got a picture though. Mom loves carousels so I should have tried to drag her there but we had to get back home so dad could get to work that evening.

The drive home was better because I wasn’t exhausted and I could take pictures of the prettiness that is the parts of Washington where there is hardly anything at all. Which is… about 1/3 of the trip? XD Maybe more. I can’t remember. 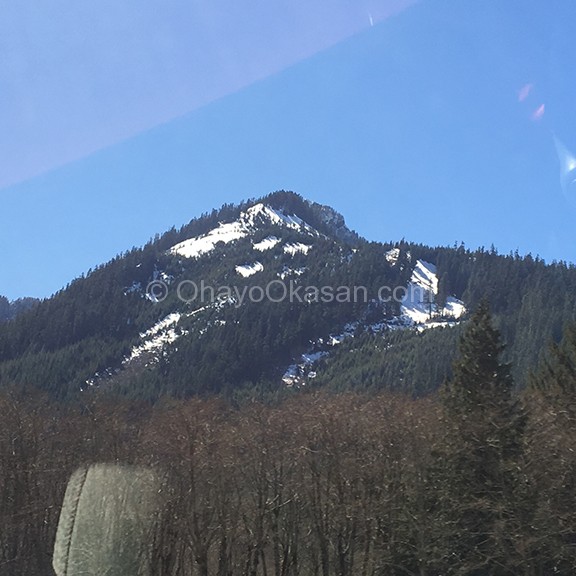 I took all the pictures from inside the car while dad was driving, so I am happy that they turned out decent. They were also taken with my phone! So I apologize that they aren’t totally perfect. :3 I loved the view of the mountain though as we were leaving the Seattle area. 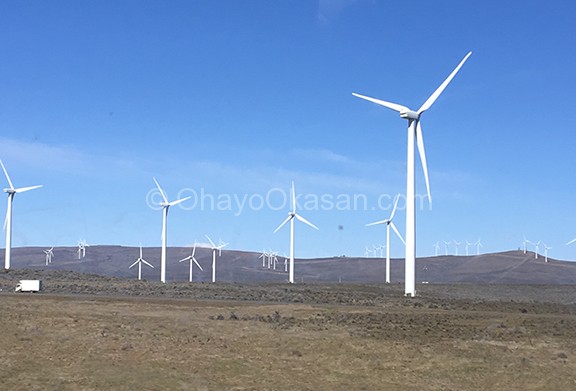 I love wind turbines. They’re big and pretty. I love that wind can be used to get electricity. I just wish it was utilized more than it currently is. 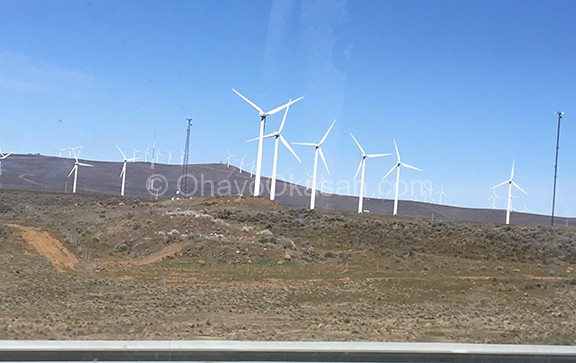 It’s not easy to get pictures of them from the opposite side of the freeway from them, going 70, and across the car from it. 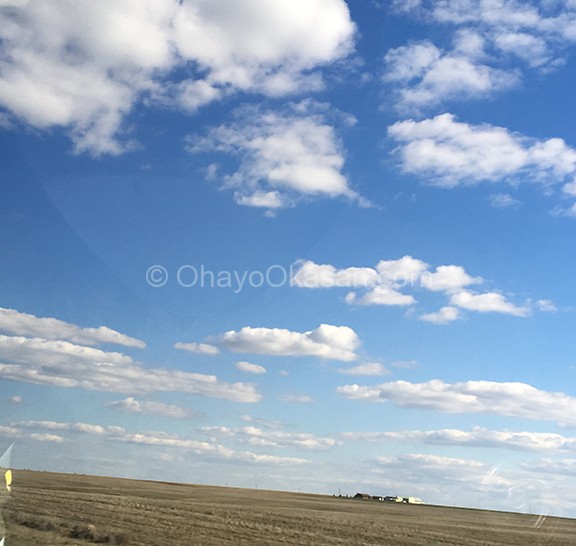 This last picture is for no other reason than I thought they clouds were pretty. They looked so much more 3D in person, I thought I could capture how stunning they were via picture. But… I think it got lost in translation so to speak.

Well, that’s all from me for now! I hope you all had a wonderful weekend and enjoyed your Easter (if you celebrate!)

Have you ever gotten anything from a Daiso store? I know in the states we only have some in California, Washington (state), and two in Texas. I wish they’d get at least one in Eastern WA since they’re only over in Western WA near Seattle. @_@;