Purr Packs is a monthly subscription box for the lovely kitties in your life! 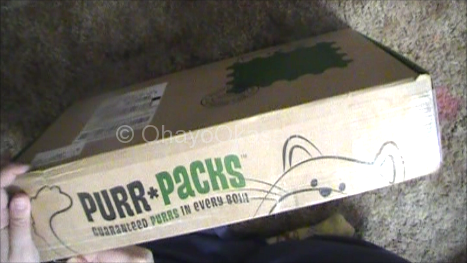 disclaimer: I was sent the following item in order to facilitate this review.

Free shipping is included with the packs as well!

In the Fun & Love and Multi-Cat Mega options you can customize flavors, colors and more in your Purr Packs to make sure that you get things you know your kitty, or kitties, will love. :3 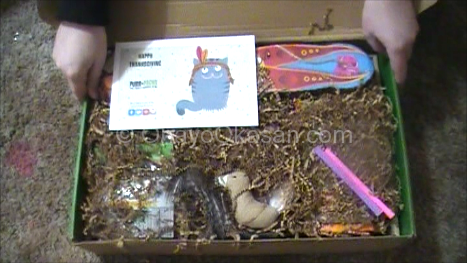 Now, I was originally going to do an unboxing video.. okay okay, I did an unboxing video but noise from outside thanks to the tree cutters, as well as cats and my own inability to speak proper English made it a jumbled up mess that no amount of editing managed to fix! Ugh.. So I’ve taken some stills from the video and will talk about it now. 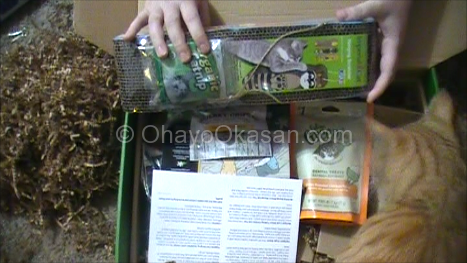 We got the Fun & Love Purr pack, that came with seven items and two different treats for the kitties. The cats were going nuts as I was unboxing the Purr Packs box, and Kimi was rubbing all over my tripod because I wouldn’t open the above cat scratcher with organic catnip. Once I did, I spilled some on accident and then it was a bliss drool fest with him and Cookie all up in the box like it was nobody’s business!

For me the only downside of the Purr Packs box was all the little confetti worm things that make an awful lot of a mess. I have to be diligent about anything thread/string like because Shadow will eat them and then if he eats them and needs another surgery we’ll be in a world of hurt. $1000+ for surgery isn’t fun. Granted these are made of paper so they’d digest better than thread like last Halloween… but I still worry. Badly.

The cats fell in love with three of the toys included in the Purr Packs this time around! One is a chicken that chirps, one is a burlap bird and the other is the cat scratcher with the catnip. But that was sort of a given. XD They love cardboard scratchers and catnip of course!

I think for a monthly thing I would get the Multi-Cat mega since we do have eight cats, that way I can keep all the cats happier because they’re getting more fun things monthly and wont get bored. Which I’ve noticed the cats tend to do.

Purr Packs does a 10% donation for every box bought no matter which option you pick. They donate to support pet rescue and adoption and organizations that make all that possible. Considering four of our cats were once our fosters, and two were rescued street kitties, having places that rescue pets and people who adopt are very near and dear to me.