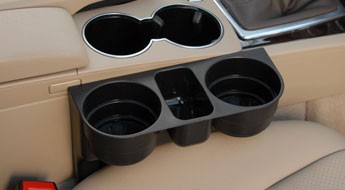 Today I am going to introduce the Car Valet!

Disclaimer: I received the following product in exchange for my review.

Yes, I know, it’s not an actual Valet. It’s a cup holder system with a slot for your cell phone/other stuff.

What do you do when you have 7 people to buy drinks for but only have four cup holders at your disposal?

But it’s difficult to try and keep one hand holding a cup carrier and drive at the same time. With so many people at home, if I am buying something for everyone, it doesn’t work if I’ve done the trip solo. So, I am thankful that the Car Valet is something that exists!

Just push tit snugly between your seat and console, and you’ll have two extra cup holders and the space for phones and other stuff. You can also put it between seats in the back so the kids have extra room for cups and things too. Just in case you have the kids with you. I often have the kids with me. But even then, one of the cup holders in the car (the one that is attached to the middle seat) is broken, so having the Car Valet makes life easier as it puts the drinks closer to whoever is in that seat!

My console carries four cups, two in front, two in back. So with this I have room for six drinks, and can easily put one in between my legs (something cold, not hot. Cold doesn’t make me jump like an accidental burn would! Though I’ve yet to actually hurt myself with a drink in the car!)

It’s also good just to have the extra storage space in the middle. I can plug my phone into the little cassette adapter I have to play music (my van does not have an upgraded stereo!), and plop is in the cell phone/accessory area and I am good to go. No more putting the phone on the dash and having it plop on the ground while I’m driving. Or putting it in the ash tray either. Not that I smoke.. I use it for change. But still. >.>

You can buy the Car Valet online as well as at Walmart and Bed Bath & Beyond. This one is a great little gift for someone with kids, or who doesn’t have cupholders, or needs more cup holders in their car. I need to get one for Lisi’s dad, he needs more cup room! hahaha.