You know I like to do arts and crafts. I’m not like the greatest most crafty lady of all time, but I do like to do things I’ve never done for the sake of creativity.

Polly Plastics allowed me to try something new that I’ve wanted to do for some time now!

Disclaimer: Lucky girl me, I got to try these for free in order to facilitate this review. This post also contains affiliate links. 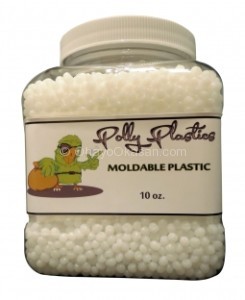 So when I heard about moldable plastic pellets that you melt, you know I had to look into that!

There are a few different brands out there, and though I got one brand for my birthday (that I forgot to use) I was able to review Polly Plastics and I had some fun making a few things with them. Though I want to try and make more things… ahh yeah… 😀 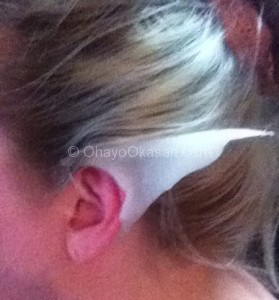 What you might not yet know is I am a GIGANTIC DORK. I’ve always wanted pointed elf ears, but… I’ve never bought any after the first ‘cheap’ $20 pair I bought at a costume shop that… really sucked to be honest. So I went ahead and tried out making my own with Polly Plastics. They didn’t look too bad. You can see above my attempt at a first ear. That was when I was still in the process.

Yea, having hot plastic put up against my ear was uncomfortable at first. But it wasn’t like it was COMPLETELY still clear and melted as I used it on my ear. I actually molded it mostly by hand before working on softening up the plastic to try and get them to fit. I still have a bit of a way to go, and they’re kind of heavy, but not too heavy that they’ll be uncomfortable to wear.

I will need spirit gum to make them fit on my ears though, and I need a headband to REALLY put my hair out of the way because it was annoying having to try not to get it stuck in the soft plastic.

The water in my tap comes out at 120* at the hottest, and one minute in the microwave takes it up to the 160* degrees that Polly Plastics needs to actually melt enough to be usable. The instructions say >140*., and we learned that 140* wasn’t enough. Ah well… It annoyed Kat but I was able to figure out that the water just wasn’t as hot as it could be. Once we got past that little mix up, everything was all good!

I’ve seen that you can use meltable plastic pellets such as Polly Plastics to make fangs, but I was unable to get it to work well when I tried it for a couple of seconds… because Risi then got into something and I had to put my crafting stuff away for then.

I think the next time I try and make something, it will likely be a unicorn horn or something else equally as awesome. Who knows, but I wish I would have had these when I was making the laurels for Kat’s Rainbow Dash Gala dress that she wore for Halloween a couple years ago.

It would have made that entire process easier, and less likely to be too heavy, fall off her head, and then break. Uggh, that was heart breaking. All my work on that costume! lol.

I’m super thrilled with Polly Plastics, and can’t wait to see what else I can make with these. 😀 Have you ever tried something like that? If so, I’d love to see what crafts you’ve done!

You can buy Polly Plastics at Amazon. 🙂