Kinda feeling like a failure as mom this weekend. Today in particular… 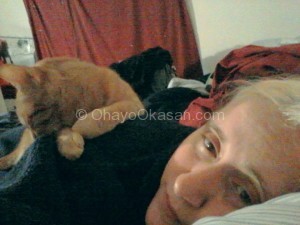 :/ Grouchy, tired, I woke up with the worst head and neck ache ever and I’ve just been sort of pushing through it.

Put toner in Kat’s hair but I don’t think I bleached the roots down enough first. Gah. So I’m going to let it relax a bit and have her to a treatment for strength before we try bleach again. Or not, I’ll let her decide before we do her pastel-pink.
Well, I hope it’ll at least come out nice, I’m glad she picked a color and I hope she’ll be happy with it either way.

Risi decided no nap even though she was half asleep in my arms and then just decided to be a turd. Then at bed time she was being a bigger butthead, tired toddler and I. So it was just one of those ‘okay fine, you just want to swat as us instead of being snuggled? Go to bed kid!’ moments. She fussed a little, but she’s quiet thank goodness!

Dinner didn’t turn out flavorful enough I guess, even though all I did was lessen the salt a little (fried chicken with lots of spices…) But gah… it was mostly eaten all gone? Risi liked it??

Tried to teach Sisi how to braid and… well… she just sorta fussed at me the entire time and I tried to be patient but after about 15 minutes I just kind of got fed up. I apologized though but I still felt like an ass. I just can’t teach for the life of me, I feel like a failure anytime I try to teach any of the kids anything. :/

Yesterday I broke TWO glass things. One bowl, and then one pretty cup. Damn… because of the pain and crap in my back and shoulders I have trouble with my right hand. At times, I suffer completely failure to grasp things with the required strength, causing me to drop things easily. 🙁 It’s getting worse and it really sucks, it’s part of the reason I don’t draw as much, because I have a hard time gripping my pencil at times.

I took my last dose of the 50,000 Vit D my doctor ordered, and there hasn’t been any change in my pain levels or fatigue at all. Blargh… I’m forcing myself through it. But it sucks.

Forgot to make sure Var took his meds today, as he woke up late and I was in the middle of picking up things and trying to make something for people to eat. So his attitude problem was worse today than it’d been in awhile. I got fed up, took away computer time. Then he kept up his crap so I took away tablet for the day… then he kept going so he lost his 3DS. More back talk just landed him in bed early for the night because I am not subjecting myself to this BS right now. I’ve been as patient as I can but seriously, how much more can I take? 🙁 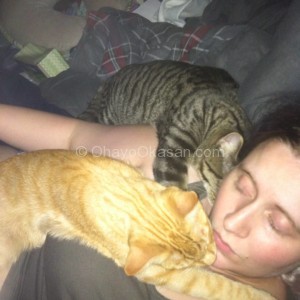 I’m at the point where I’m so glad it’ll be bedtime soon. I know Cookie and Skeeks will come and love on me. The above photo pretty much shows the level of love I get every night from those two. Even if a feel like a failure, they give keep me company at night. I’m pretty lucky for that.