Halloween is always a hectic time of year, having five kids can make it REALLY REALLY insanely hectic. This year I had plans to do 7 total Pokemon costumes… but that was just not to be. It wasn’t happening. >.> Largely because I really suck at focusing and procrastination every destroys me..

In the end neither Cid or I dressed up, and Kat decided instead of Trick or Treating in the cold, she wanted to just chill at home and I’d buy her candy. I gave the same offer to all the kids, but Sisi, Var and Lisi decided that they still wanted to Trick Or Treat.
We also decided that Risi wouldn’t remember or care much about Trick or Treating  but she would get a little bit of candy.

Sisi decided to go as a Shinx this year. Of course she wanted it to be a dressy style instead of looking more pants/shirt which would have been easy enough. I used wire in her tail to keep it up, and foam core board to keep the ears firm and standing, as well as the star at the end of her tail.

My mom worked on the bulk of Var’s costume, all I did was the inner foam for the ears and cut out the fabric for the ears white and blue. Other than that this is fleece put on a white hoodie and sweatpants. He’s a Shiny Glaceon and is so in love with his costume we can’t really get him to stop wearing it.

Lisi decided she wanted to be a Lopunny, which has the most frustrating ears EVER!! On the actual Pokemon the ears go down to her THIGHS!! I was not going to make ears that went down to Lisi’s thighs. No way… no way… not happening, they were already going to be difficult as is! I decided to go with the Shiny Lopunny, since she has pink instead of yellow fluff.

Lisi’s Lopunny ears took 7 hours and 15 minutes yes, really. There are two thin headbands, then a headband for further support made out of wire. Foam core for the general support of the regular parts of the ear (before the floppy “lop” parts. Then additional metal wire support (the wire I’d previously bought for fairy wings years ago..) doubled up as the size of them made them extremely heavy and strange to wear.

Her costume is made on a brown shirt and she wore brown leggings. I used felt for the ears and pink leggings, plus 30 feet of pink marabou boa for the fluff. I would have done all of the pink on the ears but 1.) She didn’t really want it ALL fluffy and 2.) I ran out of fluff and couldn’t afford more (and I didn’t want to have her dad go buy more..)

All in all after the hecticness of getting these costumes done (Sisi’s was the easier of the two I worked on, because of Lopunny’s ears!!) the day went well. Sisi went with her friends Z, J and S. Var went with my mom, sister, brother, and his cousins. Lisi went with a big group of friends, went to a small party, and then went on to my moms to spent the night with Var and her cousins.

Kat decided on Sushi for dinner so I made that, Risi went down for her first night without a bottle for the first time.

Enough of my rambling, now on to the pictures!

What did your kiddos go as this Halloween? 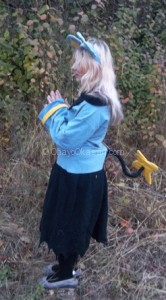 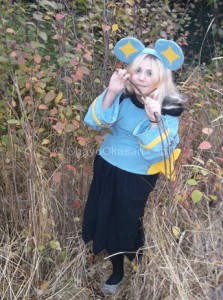 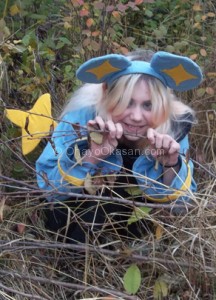 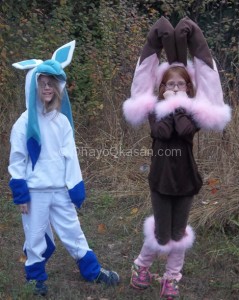 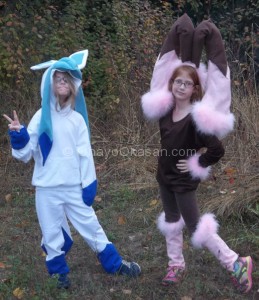 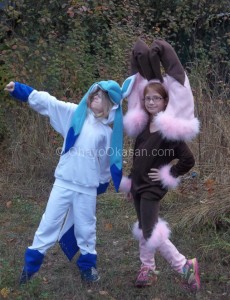 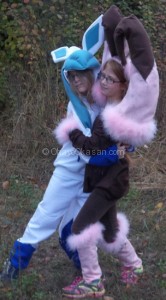 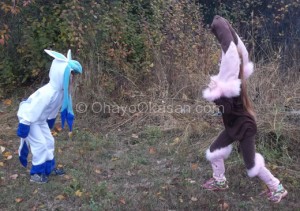 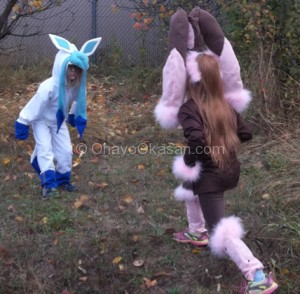 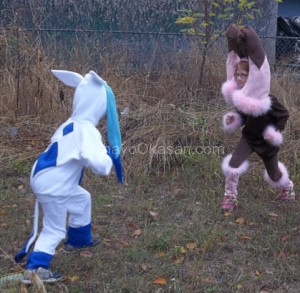