A little over a year ago we took in four kittens to foster. Three boys and one girl. Remember that? 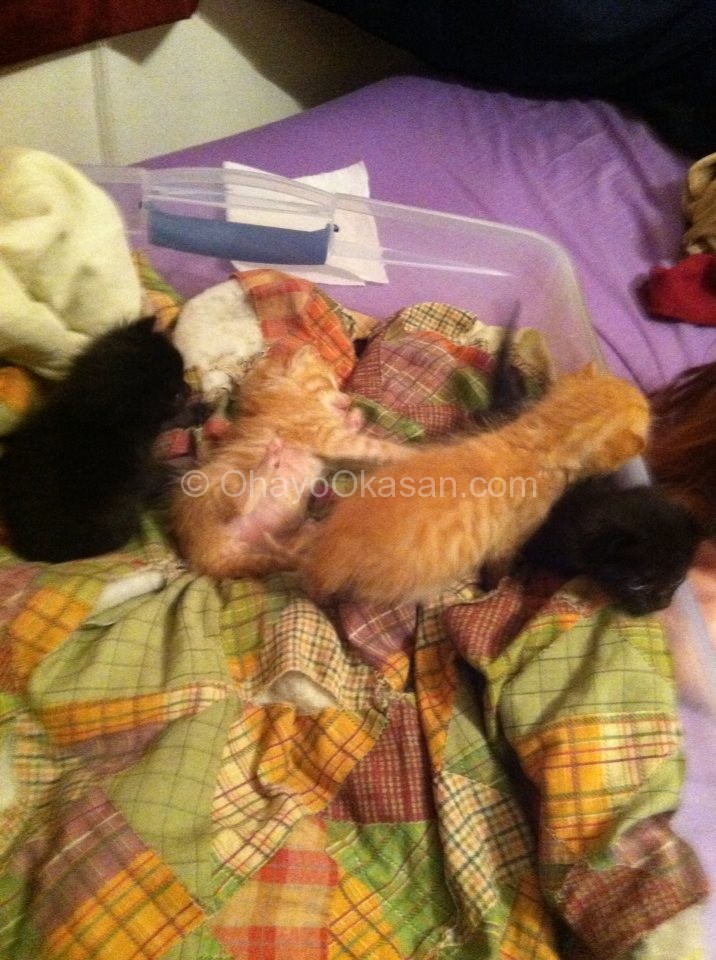 It’s amazing to think it’s been a year!! These four little kittens came in and changed our lives forever, of course they did. How could I let them go and stay at the vet in hopes that they’d eventually find homes after the woman flaked out on them?

Simple, we couldn’t!
The kids had to take a cut in their chore pay in order to afford the extra burden the additional cat food and litter would cost, but they quickly agreed that a cut in pay in order to make it easier for us to keep the kittens was totally worth it. 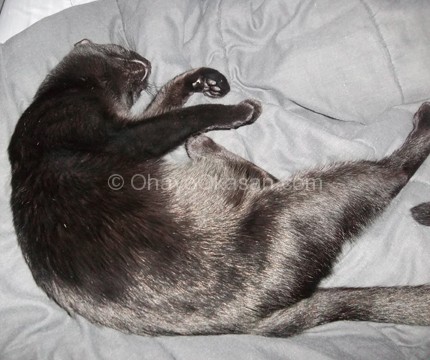 There was once a time when Mister Shadow was very sick, actually two times… but I was prepared after the first and knew what to do. See… Shadow has this strange affinity for eating thread, hair, felt strips… basically anything string like, he wanted to eat it. Well, it got all caught up inside of him and he wasn’t able to keep down real food.

So he was low on energy and couldn’t even hop up on the couch very well. I was scared when we took him to the vet, who originally thought ‘maybe worms’ only for Shadow to throw up the oral meds, so off to an emergency vet for a weekend visit and they gave him a deworming shot.

That didn’t help either. They said if we didn’t see much improvement it could just be a feeding issue and he may be special needs. Possibly needing kitten milk for the rest of his life. o.O;;

So after I didn’t see much of an improvement we fed him kitten milk, and in a few feedings… I checked the littler box (yes with gloves eww) after he went #2 only to find so much in there! Thread, hair, foamy strips, felt strips.. What the heck boy?! 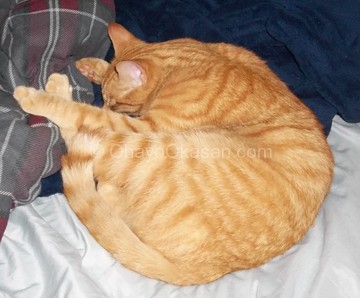 One way to tell Skeeks from Kimi, the stripes on the thighs.

He did it one more time after that, but thankfully I think he learned his lesson after I had to hold him down and try to gently remove some string he was dragging. Gag.

Skeeks was once the heaviest of the kittens we took in, Kimi quickly took over that title… but Skeeks has remained my absolute favorite. Skee bliss drools!! Basically when he’s purring, snuggling and being pet he will drool. Yes, kitten drools. Not only that he gives kisses, and rubs that drooly face up against me. It sounds strange as heck, but I absolutely love that he will lay on my chest as I am falling asleep at night and give me his sweet drooly kisses.

Skeeks is my first cat to decide to play fetch, he wasn’t taught it, he just decided that oh hey…see this stuff? Please throw it for me? So we’ll wake up with thick hair bands or pipe cleaner in bed and Skeeks looking at us with his big beautiful amber eyes. All pouty like, and he’ll get all dramatic if you don’t throw something for him! 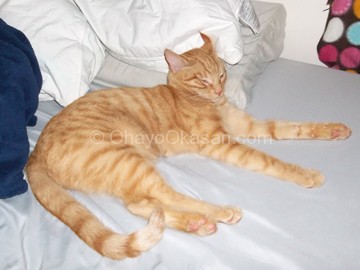 Kimi is lighter in color, as his stripes are more broken into ‘dots’ on his thighs/hips.

He plops on his side, stretches out and stares at you all sadly. He’s not called my “Kitty Puppy” for nothing!Kimi is the serious one between him and Skeeks. He’s also nicknamed “asshole” and yes I know that is mean. >.> He’s the only one I can’t get to understand NOT to go on the damn counter tops all the time. Seriously. He will do whatever it takes to get on whatever high surfaces he can.

Recently, Kimi decided that he wanted in on the fun of playing fetch. Though obviously he couldn’t use the same things as Skeeks, that just wouldn’t do. Nope, instead Kimi decided that fetch needed to happen with his most favorite thing in the universe to play with and that.. I’m afraid is bottle nipples. Yep, I eventually gave up and just gave this darn cat the old slower flow nipples from Risi’s bottles that she no longer needed. It was the only way to keep him from attempted to pull the nipples out of the ring/off the bottles and ruining them in the process!

So yeah… now we have fetch with Skeeks with hair bands or pipe cleaners, and fetch with Kimi with bottle nipples. Kimi is impatient and usually will just sit there and stare at you with his golden yellow eyes half closed as if to say “You there, human! Throw it for me now!” Then he proceeds to meow at you most demandingly.

I love these sweet boys with all my heart, and I’m so happy we have them! Puun, Cookie, Tori and Missy need different posts, as they’re all very different and this post is long enough! Whew!