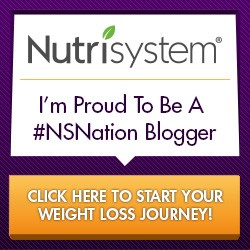 I managed to complete my NutriSystem Fast5 week and lose a bit of weight!

On the Fast5 plan you are able to lose up to 5lbs in a week if the follow the plan 100% to the letter, depending on the amount of weight you have to lose and all that jazz. I lost a total of 4.7lbs, which while it isn’t the actual full 5, is AMAZING considering I did deviate for a few reasons.

Here are the ways I ended up deviating during this week and why.

I don’t have enough of a change to really go ahead and show a picture of me this week. Progress doesn’t work that fast, at least visually, but I will go ahead and do a picture at the end of the month just to see if there are any differences in my appearance by then.

My thoughts about the Fast5 week:

Overall, I am very happy with the Fast5 week! It was hard, I wont lie, I am so used to just eating whatever I want whenever I want. I got into bad habits while on Abilify, kept up those bad habits while pregnant to an extent, but once I was pregnant got back into those bad habits again. Not that long ago I ate an entire Tira Misu cake from Fred Meyer, in a span of under 24 hours. I am not proud of this fact, but it needs said.

I would do it all over again, but I wouldn’t have set myself up for failure on Sunday. I would have kept vegetables in the car with me, and lots of water.
The week was hard, and I struggled at first. I had a headache for the first four days no matter what I did, and the shakes seemed to amp that up for some reason. I am likely just sensitive to an ingredient or two and that was why I couldn’t handle them. Some people will have great success, others my struggle like I did, but there are ways around it.

I will likely attempt a ‘Fast5’ type week again sometime in the future, but it’s not recommended to do so more than once in any 4 week period of time. I may do something similar, but with more calories (I averaged 1000 a day) once every four months or so.

Veggies I ate through the week:

Spinach, Mushrooms, Brussels Sprouts and Carrots. I didn’t really count the mushrooms as far as a veggie went, but cooking up mushrooms (with no oil) and then putting in the spinach with some garlic powder and onion powder was really delicious. The steamer of Brussels Sprouts weren’t that great, but ate 2 servings of them anyway. After a few days of spinach and mushrooms I needed change, and badly. So the last few days was carrots mostly, with some spinach here and there.

I couldn’t have survived this week without Cid’s help. Every night he attempted to make a dinner that matched closely to what I was having. When I was having my pizza, they made pizzas. When I had chicken Alfredo they had their own. Without his support and comfort I don’t think I would have had the strength to make it through it.

Disclaimer: I received the NutriSystem Fast5 foods and plan materials in order to facilitate my review. No other compensation was gained in writing this post or any other in regards to NutriSystem. All opinions are mine unless otherwise stated.