It was Sunday morning July 28th when I got online to check Facebook for anything my family may have posted. Yes, I rely on Facebook to hear things about family a lot of the time…

Hours before I woke up my Dad had posted that he was in the ER with mom, and there was talk of a surgery. She needed a blood transfusion and there was some unidentifiable mass in her pelvic area.

See… Mom had been sick with various things for awhile, about 5 weeks at this point, but she kept blowing it off as just things she’d dealt with before and there was no real reason for alarm. There wasn’t much I could really do or say, considering my parents lack insurance and couldn’t just afford to get… everything checked out sadly. 🙁

So just seeing that they were at the ER made my heart jump into my throat, if mom had agreed to go to the hospital.. it had to be something VERY bad indeed!

The next update from my dad didn’t come for hours later, with dad in the waiting room and mom needing lots of blood and insulin. She only had 6.7 units of blood upon admittance and her blood sugar was in the 400’s!! The mass in her pelvic area actually took over her entire uterus and needed to be removed.

Dad’s update said “So far they gave her 3 units of blood, several bags of fluids and insulin because her sugar level was high. So far the people here have been really good to us even though we have no insurance. The food in the cafeteria is not that great in my opinion but I wasn’t about to leave here unless I have to. I figure I have til tomorrow night before I have to be somewhere so this is where I belong. Thank you all for your kind wishes so far and lets hope all ends well. On the plus side she won’t have to worry about feminine hygiene products so the money saved can help pay for health care. On another note, we need universal health care for all so people don’t wait til they are dying to go get something looked at.”

The mass they removed was 14lbs or so of infected tissue, fibroid’s and the blood it’d ‘eaten’ from mom in who knows how long of time it had been growing. Her uterus was 5lbs, and her Fallopian tubes and ovaries needed taken as well. Her cervix ended up being somehow ‘glued’ to her bladder and thankfully did not need to be removed.

It was days before we heard if the mass was cancerous and so her stomach was left open but covered as we waited for the results. Thankfully in the end there was no cancer!

I didn’t see her on her first day in the hospital or the second, because she was in the ICU. Once she was in a normal room (a shared one, but she didn’t have a roommate for awhile) I went and visited her. I stayed for a few hours and then we decided that I’d take the overnight shift of being with her while dad was at work and my youngest sister went home and slept. Her (younger sister’s) husband was going to take the following day off work (July 31st) and would take over being with mom while I got some rest. 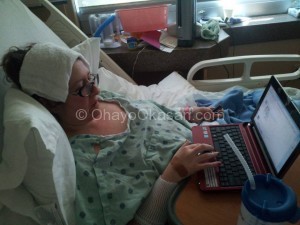 After I’d left the hospital that day (July 30th) to get some rest before my night shift mom attempted to get on facebook via her mini laptop/netbook thing. She fell asleep mid trying though (she was in Dilaudid for pain after all!) but it was good to see her trying to do things.

That night was long and difficult, the shared room didn’t have a place for another person to sleep.. so I was back and forth between a super uncomfortable chair and a somewhat comfortable one. I managed a few 5-10 minute ‘rests’ that night, but nothing more than that. Everything mom was on caused her to be a bit delirious and talked at random. She ended up napping for an hour, but after that felt very sick and didn’t know where she was. She ended up throwing up funky colored fluids (she wasn’t eating anything so it was just whatever they were giving her) and being kind of scared. 🙁

While it felt like forever, it was only the following day (the 31st) after I was back for my next night shift to hear that the mass was found to be non-cancerous! I did another over night (12 hours total) with mom and the night went better, this time she was in a private room because they had one opened up, which meant there was at least a somewhat comfortable place to rest when I got it.

It was August 1st when they closed up her wound using some steri-strips and about 18 staples. Since mom is allergic to lots of different anesthetics they didn’t attempt to give her a local for the pain, she just pushed the button on her dilaudid and they did them. She was tense and I helped her breath through the tension and pain and she did great.

She ate a little solid food that day and they took out the catheter, but they pushed a little too hard and things just weren’t ready yet. Massive swelling meant that going to the bathroom wasn’t possible and the following day the catheter was back in, she did manage to walk from her bed to the wheelchair outside of her bedroom door on this day (Aug 2nd), but that made the X-ray techs that needed her so mad because that was all the strength she had and moving for the x-rays themselves were too much! Oi… They had to x-ray her lungs because she was having some trouble with breathing, everything turned out okay.. we just had to be careful to re-position her in the bed as needed so she didn’t get all squished.

She was put back on the liquid diet that day due to her intestines being asleep still and unable to process anything else.