I’d been considering a new kitten for awhile now… well okay, about 2 months anyway. But I wasn’t really finding a cat (I was going to rescue) that would really fit well in our home. Most were listed as ‘don’t have with other pets’, ‘not for homes with children’ or a combination of both. So the idea pretty much went away after a bit there. 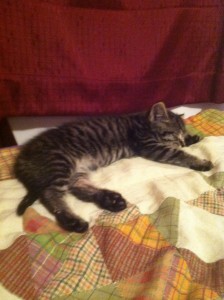 I went to Safeway one Saturday evening and not far from the main doors stood a man with a large cardboard box on the ground. “Ohhh, I just know that’s kittens or puppies and it’s going to break my heart!”

I was right of course, but instead of kittens, it was one little lone kitten left. A 6 week old little boy who just looked so cute and little… and sweet… and soft.. and… needing me. >.> Needless to say kitten chow was adding to my shopping trip! 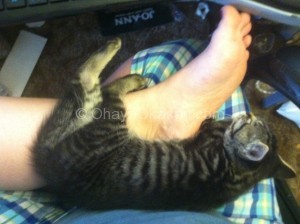 We kept Cookie away from both Puun and Tori for 100% for the first three days. Letting them to get used to one another’s scent and all that. The only time Cookie was out of the room was if someone was holding him or he slept on their lap.

He was surprisingly very sleepy that first week home!

After the 3rd day we allowed him to be out of the room only when someone was able to keep an eye on him and the other cats just in case anything seemed to be going wrong. 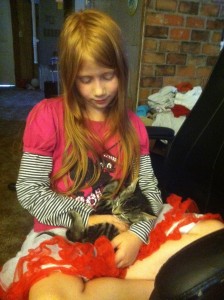 Tori wasn’t really sure what to think of Cookie at first (but at times she even hates Puuny and he’s been around here for 2 years, so I’m not really surprised!), and Cookie was trying to show Puun that he was the big boy cat around here and he couldn’t get pushed around.

After two weeks we allowed Cookie to roam freely and actually leave the bedroom even at night.

After the first week home he started developing behavior I’d never seen in a kitten that had been “fully weaned” before.  At bedtime, he would purr like crazy, crawl to my neck and attempt to suckle off of me. It was… interesting, and concerning until I read up on it and found that some cats do this. Some never grow out of it, but others do. 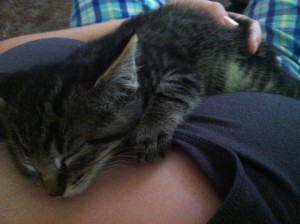 Mommy if comfortable to sleep on! <3

After the suckling part, Mookie (also known as Mookster and Monster!) would go and sleep someplace near/on/around my head. The picture below was taken one morning right when I woke up, I very carefully moved as to not disturb him. Awww <3 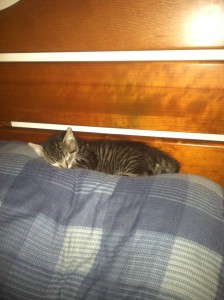 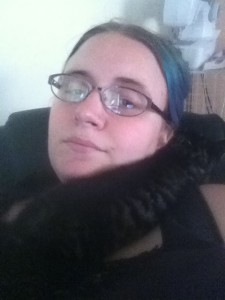 I wasn’t sure if he’d ever grow out of it, but the past few days he hasn’t really done the suckling at all at night. I’ll be honest I actually kind of (oddly!) miss it.