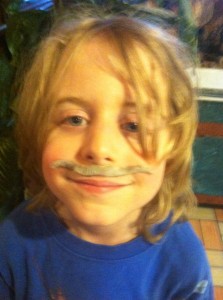 I don’t have any party pictures yet! >.> Because the party isn’t until NEXT Friday… But I will post when I do have pictures! I hope he’ll have a blast.

Var considers today to be “the luckiest birthday of the school year!” You know why?

Because it also happens to be the LAST day of school for the year! One girl in his class told him that him feeling that way was “rude.” Hmmm… I don’t know why it would be rude to think your birthday is the luckiest day of any year… I mean everyone feels their birthday is something pretty special. It wasn’t like he said no one else was important ever just that he felt the day was the luckiest birthday in the school year because he also got to end the school year on that day.

At school today he got the award for “Most Creative” in his class which is lovely. 🙂 I don’t often see him showing his creative side (ie: he doesn’t draw all the time like the girls do!), but the art teacher did mention he was one of the most creative 2nd graders she’d ever seen. So… I’ll take it.

Var has asked for some varied things for his birthday.

Kendama (everyone and their dog seems to want one of these lately?)

Doctor Who Monopoly (why?? T_T We already have Pokemon and Spider-man Monopoly… and no one plays them! @_@)

and a couple of Video games (some of them so old that they’re $100 because they’re considered collectibles! ACK!)

I’ve bought him one present, and it’s not Doctor Who Monopoly. But it IS Doctor Who related!

I got him THIS!

He was fairly jealous of Lisi’s little Sonic Screwdriver that she got from her dad… so… I figured he’d like this and it’d actually get some more use than yet another game of Monopoly that we’d never play. (I hate Monopoly… >.<)

I can’t wait to take pictures at his party next week!