I don’t like today’s prompt too much (write up a new word and all that) so I am just going to go ahead and write about our first snow fall of the… year? Yeah. Something like that. I go by “school year” terms more than calendar year a lot of the time. I have ever since I was a child and all that.

So, as I said one time to my ex (not ex husband, the ex that I am still friends with.. Lisi’s dad and all) we do have four seasons around here. But not the most usual four seasons. We have “Almost Winter”, “Winter”, “Still Winter” and “Summer” as our seasons.

That got a good laugh out of him and he used it one time as a joke with someone and they laughed too. Yay! Something of mine that can be added to his (not sure if ever gonna happen) comedy act.

My ex is pretty funny, and really talented in magical card tricks. I keep telling him he should put on a comedy show or a magic card show one of these days… but he’s surprisingly shy about his talents.

Anyway! Last night it went from cold as heck and raining to snowing for a few inches. Which meant that my van was covered in a layer of ice, and about 2ish inches of snow. Ewww… joy? Not really. I was hoping the snow would hold off until after Thanksgiving! Pooey on you snow!

Yes, I know it’s odd that I hate snow so much considering that my pen/cil name happens to mean “Snow Child” in Japanese. ^_^;;

Actually, I have a love/hate thing with snow. I LOVE how pretty untouched snow looks… but I hate driving in it/being around other drivers in it, and the cold makes me hurt a lot. 🙁

So! I have pictures for you! 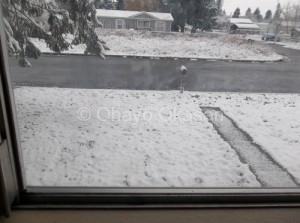 This one above is from right in front of my office desk. That’s part of my front yard, my mailbox, and what little of a sidewalk we have leading up to the door. XD It doesn’t even go to the curb, which I find humorous for some reason. That’s only about 1/2 of the front yard really. Though as you can see the streets are surprisingly clear, just wet. I can drive in wet, and so can most of the people here who appear to forget h ow to drive in the snow every year. Seriously people, go slower and turn your lights on because of the visibility issues. 😛

This is Aussie’s first time experiencing a fairly early snowfall, though he did experience some around my birthday last year/earlier 2012 and all that.

I’m handling the snow surprisingly well, and got all the kids to school even with my usual “fsk it, it’s snowed and I dun wanna drive!” type of mentality. I drove the oldest to school with a 2/3 visibility out of my windshield. D: I couldn’t get all the ice off for the life of me! Uggghhh 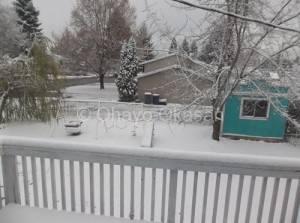 This is out our back sliding door, you can see my adorable little shed, and the poor snow covered swing set. I guess it doesn’t matter now if I buy a tarp or not for it. :/ Shoot… hopefully it holds up through the winter okay!

Look at my poor naked tree D: poor tree, it looks as cold as I feel. 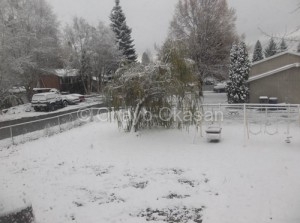 This is out of my kitchen window and you can see our other tree hasn’t lost all its leaves just yet. So at least it’s not as naked as the other tree.

Today I bought the kids a “snow brick” maker thing.. that they can pack snow into and make perfect little bricks so they can attempt to make an igloo or something if they want to. I figure I might as well, it was pretty cheap over at Target here. It was sorta an impulse buy just like the chocolate edition monopoly I just bought and getting our Advents Calendars really early. But at least I have them!

Yay for being random! I just wanted to write about something and get something out. So that is our snow, from pretty recent to the time of me posting it. It’s still snowing, I think we’re supposed to get a total of about 4 inches. D:

Somehow, we still have to try and get all the Halloween decorations down. We’re lazy and haven’t really done it all the way yet. Ooops!

Welp, that’s enough for me for now! Hope everyone have a wonderful week!