A bit ago, I did a Wordless Wednesday post with pictures of pretty nails I bought. Actually it’s right here!

After having so many problems with the nails I bought (basically things falling off shortly after I start wearing, or even before I get them out of their little gift boxes etc…) I actually took the plunge to just buy a bunch of nail stuff, and three different colors of shorter fake nails. Then of course we had to move… and I didn’t get to make any while we were packing.

However now? Ohhh now. I’ve actually gotten to take some ‘sanity’ time and make some pretties! Like these ones. It’s not the best picture, but these are the ones I am wearing right now… They’re  my second ever set actually. I haven’t worn the first set yet! 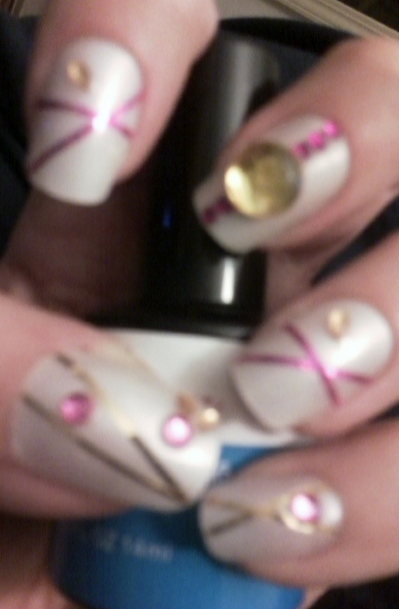 This was taken after I did some car repair, unpacking, dish washing, etc!

This is my first designed set…

Yeah, the jewel on this hands middle finger is slightly off center. :/ I realized it a little too late. But I don’t think anyone will be noticing that too much when I do wear them!

Then of course… the big girls asked me to design them sets. So I had them give me an idea of what they wanted. Kat couldn’t give me much idea… “I want it go to blue, green, yellow, orange, and  then red. With… these fruits” and listed what she wanted. I had to pick from there. Yeesh! Sis really didn’t make it much easier on me to be honest. All she decided was that she wanted the blue nails, and then orange gems. That was it. o.O Talk about pressure to wing it!

Maybe not the most awesomely cluttered and designed nails in the history of nails ever… I don’t know.. but I didn’t want to get too complicated for either set to be honest. They’re going to be worn by kids for starters and… well… they’re only my 3rd and 4th sets! 😛

Both of the girls’ sets will be trimmed a bit once they’re on their hands and filed down to a decent size. Because these nails, while the shortest I was able to find where I got my supplies are still so long I had to even file them down for myself! As you can see on Sis’ set… I  haven’t trimmed hers just yet and you can see where I removed them from their little …nail tree… thing?

The orange glitter seems to wash out too  much on the blue nails with flash.. aside from in certain sports.. which is annoying. Not that it showed up as much as I wanted it to in the first place. Still.. in the morning Sis will get to see her nails and I hope the likes them. Those darn little flat-back pearls tend to love to go shooting all over the place if I’m not insanely careful with the little tweezers. @_@ Which… considering the time these take and how it gets hard to focus on little itty bitty things after a bit? Became difficult for me after the first hand of Sis’. Kat’s too… I think. I can’t remember.

Welp! Enough for me for now!