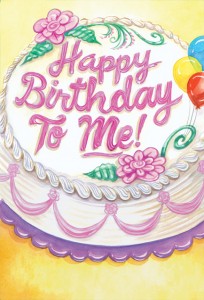 Actually I kind of loathe my birthday. Once I passed the 24th year, I didn’t want to age any more. So I kind of dread this day every year.  To make it even more bitter-sweet this year, tomorrow Aussie leaves. So I’ve been pretending for a bit now that March just wasn’t going to happen just yet. But here it is, and at 11:15am PST (it’s 10:56 as I type this…) I will officially be…

28 years old. Yeah, I know, I am making a fuss over my 28th birthday. Still, I haven’t really had the best history with my birthdays, and there are other reasons for my lack of fully enjoying them. *sigh*

Still, I am trying to be as pleasant and happy as possible today. Lis and Var spent about an hour last night making me a present… or is it presents? I have no idea. They banned me from the dining room, and every time they came to show anyone their creation would say “You can’t look! Don’t look Momma!” So I had to squeeze my eyes shut. Then they found a giant cardboard box (or the present is bigger than I think?) and attempted to wrap, without tape. Eventually giving up trying (bless their hearts *gigglesnort*), and resorting to having Aussie wrap it for them.

We still couldn’t find the tape, so the wrapping paper has been gluesticked (so not a real word, but it’ll do…) on the best it could be.

I got to read the rambling card from Nan, aka Aussie’s grandma. It was an adorable card, but I could tell it was written by a grandma. XD Which mean’s it was adorable for the content, it was like talking to Nana (my grandma) but in written form! Too cute!

I’ve gotten two happy birthday texts today, one from Phi (my brother) and one from Mom. All the kids actually remembered me this morning and said happy birthday. Which is nice, usually it tends to kind of go over their heads, even if it’s always the same day. So it was nice to actually hear happy birthday from everyone.

Still, as much as I wish it was so, life doesn’t simply stop because it’s my birthday. I don’t get to skip school like I did when I was little (then again, I do want to go to dance class) , and things happen which do require me to… oh, yanno, be a grown up? (Totally overrated btw :P)

Over the weekend Kat’s glasses fell on the floor, and of course got stepped on by Sisi. @_@ Which caused the frame to crack in the worst spot, the upper corner right by the… uhhh… bridge? The thing that goes over the nose?  Yeah, right there. The Ex-h tried to super-glue them together, but they didn’t hold. So she was wearing them the best she could until I got her home. Thankfully? Hot glue worked enough that they’ll hold, at least for now.

Thankfully Coastal Contacts (link but not an affiliate link) has a deal where your first pair of glasses is free, because insurance wont allow Kat another pair of glasses that they’ll pay for until, hmmm May. Which I realize is only a couple of months away (oh hey, It’s 11:15, I am officially 28. Go me?), but I can’t expect that hot glue is going to hold up all that time. @_@

*sigh* Wow, it’s been a day already, and this post is taking me so long to write because it’s one of those ‘one thing after another’ type of mornings.

Monday’s around here means that school starts at 10AM for the oldest three, but normal time for Lisi. So, I got the kids to school blessedly on time despite Var’s resistance to getting ready. Made it to the eye doctors to get a copy of Kat’s prescription, got coffee for Aussie and I, got home, and realized I can’t actually order the glasses without the kiddo home, because I have to measure her “PD”. Joyous.

After a game of “Go Fish” with Aussie and Lisi, I was doing some business here on Lappy when Lisi fell of Aussie’s back while playing ‘horsey’. Of course she ended up falling right on the upturned step-stool (why was it there? I will never know, it doesn’t belong in the living room!) and ended up getting a slight injury to the ‘knee’ put on her left leg. @_@

Much crying and fussing later, I managed to get her out of her tights to check and she starts screaming over bleeding from the area of rubbed raw skin. @_@ Ahhhh!!

Hopefully, the rest of the day goes well, and nothing awful happens at Red Lobster tonight for dinner. It’s busy birthdays that make me miss the non-busy birthdays of the past, where I got to skip school and didn’t have chores to do. 😛

Then again, I wouldn’t trade this doing the mom thing for the world. Even if it can wear me down before noon sometimes! I’m going to go, and enjoy my birthday and everything else that life brings today! Hope you all enjoy your day too!